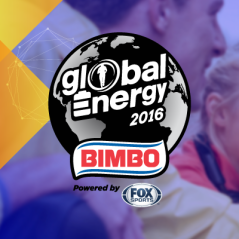 As we runners know far too well racing can get expensive, especially when you do a lot of ’em. Those registration costs (and convenience fees) can add up pretty darn quickly and that’s even if you just do a local race and don’t have to worry about transportation, lodging food and all of those other incidentals that inevitably pop up.

Now, there are cool race sites out there like Raceshed (and even Groupon) that help you find discounts and give your wallet a little bit of a break. And when you come across a good ‘ole fashioned “cheap offer” why not jump and give it a whirl.

That happened to me this week and it turned out pretty well.

Oh, and I helped break a world record in the process… more on that in a bit. 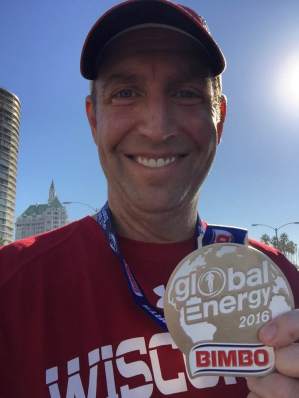 Two weeks ago I ran the REVEL Big Cottonwood Half Marathon and set a PR (still hyper about it). It was a great time and it left me antsy for my next race, which unfortunately wouldn’t have been until Oct. 22nd at the Lexus Laceup Ventura Half Marathon. Six whole weeks.

Nah. I needed a little tune-up race to tide me over. Kind of like a happy hour appetizer that satiates you until din-din time. Like that, but for running.

Apparently the internet fairies must have known I was on the hunt for a cheap race because lo and behold, I got a Groupon e-mail which listed a few upcoming races that they were pushing. And one in particular caught my eye.

And once I got past snickering about “Bimbo”… it is a baking company, in case you don’t know… it seemed like it might be fun.

And it was only going to set me back $15 thanks to Groupon. Sign me up.

FYI, you can learn more about the race by clicking here. It’s an annual thing.

So Sunday morning I got up at the crack of dawn and made my way to Long Beach. Oh, it did cost me $10 to park, so the whole race experience set me back $25.

But this was a decent affair with 905 people running the 10K race and a healthy number doing the 3K fun run. The pre and post race set-up was fine with some food, booths and standard swag bag and shirt. And the finisher’s medal was pretty nice as well.

The course was simple, a modified out and back along the beach running path in Long Beach and also at times in sight of the Queen Mary. Nothing earth shattering, but still a solid race and fairly well-organized (the check-in line was a tad slow, but no biggie).

As for my personal race, I felt just okay about it. Some warmer than expected weather and some restless sleep the night before seemed to keep me from bringing my “A” game. Or my “B” game for that matter. I got fatigued sooner than I expected and finished with a time that didn’t excite but at the same time didn’t totally disappoint me.

Still a fun race that I’m glad I ran and may possibly do again next year.

Now I almost forgot that I teased a whole world record thingee, didn’t I? Well, the one really cool thing about the race was that it wasn’t just one race. In fact it was 36 races, all being run in cities around the world. All on the same day: September 25th.

From Buenos Aires to Beijing and Lima to Long Beach, 22 countries participated in this cool race event. FYI, the US had four cities running. In addition to Long Beach, Philadelphia, Orlando and Phoenix also got their Bimbo on.

In the end, the event garnered a Guinness World Record for “the most number of cities participating in one single race on the same day.”

Pretty cool and an enjoyable time.

And to quote Bob Barker, “the price is right.”

Save a buck, break a world record… and Run on!