In the fall of 2008,  when I was at a particularly low point, I made the decision to push myself to do something I thought impossible… I was going to run a marathon.

With very little running experience (just a smattering of 10Ks in my entire life) I had no real idea how I was going to make this crazy dream a reality. I needed someone to teach me how to run. I looked around at a bunch of LA running groups, but they were either expensive or located too far away for me to be confident I wouldn’t give up.

And then I saw a pamphlet for the AIDS Marathon Training Program (Team to End AIDS) and read how they’d train you to run the LA Marathon in exchange for you raising funds to help their charity APLA (AIDS Project Los Angeles). Cool.

And they trained in Griffith Park, which was a 5-minute drive from my apartment. Super cool.

So just like that I signed up. And they trained me to run the LA Marathon. And the rest is history for me.

Team To End AIDS transformed me from a couch potato into a distance runner. I will be forever grateful to them. 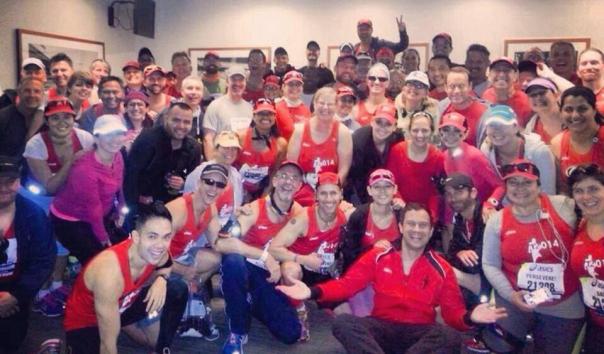 Race morning for the LA Marathon with T2. I’m the one with the goofiest grin.

For the past seven years I’ve run the Los Angeles Marathon as a proud member of Team To End AIDS.

And when sign-up happened for next year’s Los Angeles Marathon, I happily signed up. I was looking forward to seeing my running family and spending the next six months’ worth of Saturdays running with T2.

And then this week, I learned some sad news.

This year is going to be the final year of the Team To End AIDS marathon training program.

But in my sadness, there is a very happy reality.

The reason for the T2 program ending is because APLA has been so successful in raising funds and helping others, that they’ve expanded far beyond their original function and need to evolve.

You can read more about APLA and the great work they do by clicking here.

And let me give you a few stats about APLA and the AIDS Marathon/T2 program (begun in 1999):

So we’re all going into training season knowing this will be the final one for T2. As a result, I expect the 2017 T2 team to be massive as alumni come out of the woodwork to train for one last hurrah.

I’ll be writing plenty more about my T2 training for this final season up until and after race day on March 19th, 2017.

It’s going to be one helluva hurrah!

Posted on September 28, 2016, in General and tagged Los Angeles Marathon, Team To End AIDS. Bookmark the permalink. Comments Off on …ONE LAST HURRAH!.