“WHAT GRINDS MY GEARS…”

Be warned: today is a day to jump up on your soapbox and vent about stuff we hate in the things we love.

You preach it Peter!

For the last week I’ve been consumed by all things soccer (aka “football for any non-Americans out there). I’ve been a fan of the sport ever since I could yell “Goal” (or whatever the catchphrase was way back when). And every four years I glue myself to the TV to watch the World Cup and witness the very best soccer has to offer.

And the very worst.

For all of the fantastic goals, tremendous saves and incredible feats of athleticism, there is one thing I see time and again and absolutely loathe about the current state of soccer: diving.

For those of you not in the know, the sport of soccer has been plagued by players faking being fouled, dropping to the ground and rolling around like they are mortally wounded… all for the sake of drawing a “faux” penalty and getting a free kick or perhaps even a penalty shot (the closest thing soccer has to a “gimme” goal).

And we the fans are forced to watch the slow-mo replay of the supposed transgression only to see phantom pushes and nonexistent trips followed by Oscar-worthy (or Razzie-worthy) dives and death scenes. Seriously, it plays out like a bad Michael Bay movie (all you need is a driving musical score and a transforming robot or two). 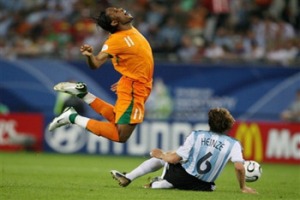 Yet as soon as the foul is called (and perhaps a yellow card handed out), the wounded player knocking on death’s door miraculously recovers and lives to dive again. Praise be to fakery.

The sad thing is that FIFA (don’t get me started on that corrupt and worthless organization) lets it continue unpunished to the point where it’s become part of the game strategy for many teams.

It really has impacted the game and taken away some of the fun.

Now what does this have to do with running you might ask?

Um, soccer players run, right? So there you go. End of article and time for me to go watch more World Cup.

Okay, I realized that even something totally awesome can have aspects or practices that you just don’t dig.

We all know they rock, but let’s be honest, aren’t there a few things about the race experience that make you less than happy?

Now your dislike can range from being mildly perturbed to wanting to call out a tactical nuclear strike against those responsible.

To put it in the words of the Pawtucket Patriot-pounding Peter Griffin, it “Grinds your gears.”

In the name of creative bitching & moaning I thought I’d rattle off a quartet of things about races that just kinda suck… and this list is by no means complete (look for follow-up posts down the road).

Daddy Warbucks I am not.

Race “Convenience/Registration” Fees- Let’s be honest, we’ve all hated “convenience fees” ever since Ticketmaster first had the gall to institute them (bastards). And now racing has followed suit. Convenience fees (however they label them) are utter non-sense and just a way to make more money by hiding it as an “after the fact” add on. It’s hard enough on the wallet to pony up $100 or so for each half marathon, but it really is an insult to then hear “Oh wait, don’t forget about that extra $5- $10 that is vitally necessary to blah blah blah blah blah.” (Does anyone believe a word of what they say?)  Remember, what the coupon or race discount giveth, the convenience fee taketh away. Well, at least they don’t charge us convenience fees for bag check… yet (I best shut up here).

Is this thing on?

Bad Pre-race Banter- We’re all encouraged to be at our race corals nice and early, only to then be subjected to an hour or so of some of the driest, most tedious and un-funny PA chatter available. Beuller… Beuller… Bueller. Sometimes it’s like bad open mike night at the local beatnik coffee shop. Sure there’s information that needs to be given, but remember it’s often not what’s said, but how it’s said. So, don’t give the mike to some random person just because they possess the ability to generate words. You get points for style. How about finding someone who is good at public speaking, like really good. Maybe a local comedian or someone in town who knows how to work a crowd. How cool would it be to have someone like Patton Oswalt or Jim Gaffigan deliver pre-race tidbits (and a few laughs). Or maybe the gang from the local morning radio show. After all, their day job is to play music, talk and entertain sleep-deprived commuters so they don’t go all “Death Race 2000” with their cars. Just an idea.

The “Moving” Wall- I’ve mentioned this before, but it bears repeating again… and again… and again. If you’re running with friends or a group, that is totally awesome. But please, please, please don’t run any more than 3 abreast. While a course may be 13.1 or 26.2 miles long, it’s not nearly as wide. And when 4 or 6 of you run side-by-side, it basically creates a sweaty mobile barricade impeding hundreds or thousands of runners who’d like to pass you. Wars have started for less. Solidarity is to be commended amongst runners, but people will love you even more if you strut your stuff single file. And hell, think of the fun you can have by creating a giant running “crazy train.” Not only can you draft off of each other, but you can take turns being the locomotive, as well as the last car in the train telling everyone behind you to “check out my caboose.” Or think of it as the worlds fastest conga line. Who doesn’t love a conga line?

I’ll recycle it, I promise.

No Finish Line Snack Baggies- Here’s something that’s a problem at certain races (you listening to me Rock ‘n’ Roll series)… providing little bags at the finish line to hold your post-race snacks. Yup, I’ve just run 13.1 or 26.2 miles and I’m sweaty, dehydrated and hungry/borderline cannibalistic. After I get a medal around my neck all I want is some fluids and a few snacks so I can feel human again. And races oblige by handing you oodles of goodies like: water, bananas, bagels, oranges, chips, chocolate milk and a cornucopia of cookies and crackers… but some races refuse to give you anything to carry them in. After pounding pavement non-stop for five hours, my dexterity is not exactly at its zenith. I’m doing my best to keep from collapsing and here you want me to cradle an entire buffet of carbohydrates in my arms. Why not ask me to juggle flaming chainsaws while you’re at it. Maybe you could take a few cents from my “convenience fee” and spring for some baggies.

Okay, time to put the soapbox back into storage. For now, anyway.

No diving allowed… and Run on!

(Now I want to hear from you. Pick something from the race experience that really “Grinds your gears.” Let me know the what, the why and your thoughts on how to fix the problem.)