This past weekend I ran the Hollywood Half Marathon. I had a great time meeting up with friends before the race and I also PR’d, so a win/win for me.

And like I do with all races, I immerse myself in the whole atmosphere surrounding the event (hence my multiple “Experience” posts that I put up for each race). I came across something interesting before this year’s Hollywood Half Marathon that I think would make a great “beta test” for a hopefully recurring series on Tripping The Kenyans… “Runner’s Court.” This would be where I take a fun “controversial topic” and present it as a mock court case with me as presiding judge. And “No,” I haven’t gone out and bought a judge’s robe… as far as you know.

For the record, I’ll state the potential “Runner’s crime” and present some arguments for both the prosecution and defense. Then I’ll throw it to all of you to act as jury members. By commenting here, or on Facebook you can present your opinions to hopefully sway your fellow jury members (yup, get all “12 Angry Men” on ’em) and cast your vote. I’ll tabulate all of the guilty/non-guilty responses and render a verdict along with sentencing (if warranted). And did I mention I’m a hanging judge… bwa ha ha ha.

So without further ado… court is now in session.

“CASE OF THE SACRED SHIRT”

Evidence Item A: “The Legacy Shirt”

BACKGROUND: Runner’s, like other athletes, can be a superstitious lot and often engage in activities and exhibit behavior that might seem a bit “odd” to most people. One such superstition is that you should never wear a race’s shirt during that particular race because you haven’t “earned” it yet and risk angering the running gods and as a result have a bad race. You can check out more on this subject in a prior TTK post entitled “Running Nugget: The Forbidden Shirt.” At this year’s Hollywood Half Marathon, in addition to the regular race shirt (which should not be worn until after the race… unless you like to flip “the finger” to Zeus, Hermes and the rest o’ the immortals) the creators of the race awarded legacy runners (people who had run all 3 of the Hollywood Half Marathon races) a stylish “Legacy runner” shirt. The question that then came up; was the “legacy shirt” also subject to the superstition? People on both sides got into heated debate and now it shall be settled in a faux court of running law.

CHARGE: The Hollywood Half Marathon “legacy shirt” is indeed subject to the “Forbidden Shirt” protocol and runners should not wear it until after the 2014 race (or their subsequent 3rd running of the HHM) unless they want to risk offending the universe and being “smited”… “smotten”… um, bad things happening.

PROSECUTION (OPENING STATEMENT): The “rules” imply that no shirt given/purchased for a race can be worn at that particular race. It must be “earned” by completion of said race and thereby “exorcising the race demons.” Once the race has been run, the shirt or shirts in question can be worn forever and “ad nauseum.” So suck it.

DEFENSE (REBUTTAL): The rules are hazy on this matter and open to interpretation. The “Legacy shirt” is not in fact a shirt given for that particular race, but rather to reward the runner’s “continuing insanity” by running a race year after year after year. It falls outside of the jurisdiction of “Forbidden Shirt” protocol. Dumbass!

PROSECUTION: The legacy shirt is indeed a running shirt made of dri-fit material and intended to be worn during the race to show fellow runners and spectators that they support the event and all it stands for. They also want to rock that shirt for the photographers (and selfies) and show off their impressive runner’s physiques to all who watch and drool. It therefore qualifies as a race shirt and should not be worn at that particular running of The Hollywood Half Marathon. You wanna meet out back later and settle this like real lawyers?

Justice will be done!

DEFENSE: The legacy shirt was given as a reward for the runner’s dedication to this fun race and the moment it was handed out the participant is declared a “legacy runner” thereby automatically making the shirt “Racing Demon-free.” And if they wash it before the race any linger traces of bad mojo should be whisked away in the rinse cycle. I’m ready when you are, so bring it bitch.

PROSECUTION’S CLOSING STATEMENT: Ladies and gentlemen of the jury, a runner of The Hollywood Half Marathon is declared a legacy runner after completing 3 consecutive races. By receiving the shirt in 2014 they will have only actually completed two races (2012 & 2013). They must therefore run the 2014 race “sans legacy shirt” in order to activate the “lifetime racing demon protection guarantee.” It is only safe to be worn after the race or in subsequent races. To do otherwise is to risk being struck down with an achy knee, stitch in the side or runner’s trots. And to quote the case of Bud Light vs. Superstitions… “It’s only weird if it doesn’t work.” The prosecution rests.

DEFENSE’S CLOSING STATEMENT: The legacy shirt created by The Hollywood Half Marathon is indeed a tribute to the spirit of the runners competing in the race and enjoying the hell out of themselves. They’ve already agreed not to wear the regular race shirt and that should be enough of a sacrifice to appease the running gods. They therefore should be able to wear the legacy shirt without fear of retribution or crazy acts of “omnipotent revenge” like gastrointestinal distress or unexplained wedgies. Or they could also just declare the whole “Forbidden Shirt” protocol to be utter superstitious nonsense and wear whatever the hell they want whenever they want (although I’d have to advise against it). And if I may quote THE TERMINATOR, there is… “No fate but what we make.” I love that flick. The defense rests. 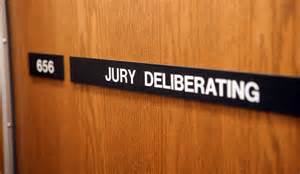 JUDGE’S INSTRUCTIONS: The members of the jury (the running community) having heard the arguments from the prosecution and defense must decide for themselves and vote. One thing that should be noted by all members of the jury is regardless of the vote the “legacy shirt” is a very cool looking shirt and a great reward to the runners who support The Hollywood Half Marathon year in and year out. In fact I’m wearing mine under my robe right now. I make no promises about pants.

So with that information and horrific mental picture in your mind, please cast your vote in the comment’s section on the TTK website or Facebook page where this is posted.

GUILTY- The HHM “legacy shirt” and all other legacy shirts are subject to the “Forbidden Shirt” protocol and should not be worn until after the race where it was issued.

NOT GUILTY- The HHM “legacy shirt” is exempt from the “Forbidden Shirt” protocol and is free to be worn immediately… but still wash it first, so it’s nice and soft and clean.

The votes shall be tallied (majority wins) until 12:00pm PST on Tuesday April 8th. A verdict (and potential sentencing) will then be read.

Court is adjourned while the jury deliberates… and Run on!

Posted on April 7, 2014, in General, Humor, Runner's Court and tagged Hollywood Half Marathon, The Forbidden Shirt. Bookmark the permalink. 28 Comments.