The old saying goes “If at first you don’t succeed, try try again.” 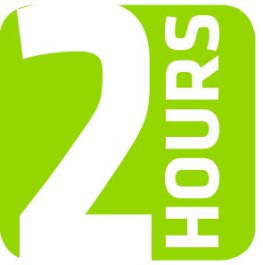 But exactly how many “tries” should one attempt? I think I might finally have an answer to that question.

No sooner had I received my first ever piece o’ bling, then I challenged myself to one day run a sub 2-hour half marathon.

I thought it was happen sooner rather than later.

That would be a big ‘ole nope.

It didn’t happen on my 2nd half marathon, nor my 3rd.

In September 2014, I literally came within 60 seconds of doing it as I ran the REVEL Big Cottonwood Half Marathon in 2:01:00.

In the two years since, while I’ve had plenty of good races, I hadn’t come within 5 minutes of eclipsing that elusive mark.

I was seriously starting to doubt if I’d ever break it.

Cut to the beginning of last week. I was prepping to run the 2016 Big Cottonwood Half Marathon, the scene of my previous 2-hour near miss.

This was going to be half marathon #46 for me. While I was ready and excited for the race, I didn’t feel I was in the same shape I was in 2014 when I flirted with 2-hours. To be honest, I didn’t think I had a realistic shot at it at all.

Then the entire week leading up to the race played out. And it was a crappy week. I mean really crappy. It seemed that every knucklehead in the world decided to pay me a call or get up in my business. By Thursday, I was really hating people in general.

Oh, and then my credit card got hacked, which is just a mountain of suck to deal with.

I was in quite a mood and desperately needed to blow off some steam. My buddy Jeff called and asked if I had a strategy for Saturday’s race. I simply responded, “I’m going to run pissed.”

Now, I normally try to heed the battle-tested strategy of “not going out too fast.” Failing to do so is usually a recipe for disaster.

But Big Cottonwood has a downhill slope (quite steep at times) for the first 9.5 miles before basically flattening out. So starting out faster than normal is actually not so bad of a strategy.

And did I mention I was going to run pissed? It basically meant I was either going to have a really fast run for me or crash and bonk.

Hold on one second. If you haven’t run Big Cottonwood before, it’s a beautiful course and REVEL does an awesome job… check ’em out.

After almost freezing off various parts of my anatomy waiting at the high-altitude start area (7,344 feet above sea level), we finally got the go-ahead to line up at the start. Stripping off all of my layers in the 38˚ weather (chilly willy) I stood ready with the 2600 other half marathoners.

Hang loose… and run on!

Bang. And we were off.

Now I calculated that to run a 2-hour half marathon, I needed an average pace of 9:09 min/mile or less.

I thought my goal for a sub 2-hour half was going to be over before it really got started. After the first mile I saw that my pace was 9:55 min/mile. Now granted I was still warming up, but I wondered if I was going to be able to ramp up my pace almost a full min/mile faster and maintain that for a dozen more miles. Scooby-Doo, we had some work to do now.

I uttered my mantra “my race, my pace” to myself. And picked up the pace. And then picked it up again.

As the miles rolled on, I saw that my overall pace was getting faster and faster.

By the halfway point, I had gotten my pace down to 9:10 min/mile, close to what I needed to have a chance to break the mark. It was also at the halfway point that I caught sight of the 2:00 pacer. She had a “2:00” sign on a stick and it was waving above her head. Now I’m not sure, but I do believe the sign itself was taunting me.

Since I knew the race course flattened out at the 9.5 mile mark, I only had a short time to utilize the downward slope and “bank” a few precious seconds (maybe even a full minute or 2). I knew I would need it near the end.

So I picked up the pace again.

At mile 7.5 a small blister started to form on my right foot. I tried to ignore it. And picked up the pace.

At mile 8 I looked down at my watch and grinned. My overall pace was now 8:59 min/mile. But I was starting to breathe a little bit harder and my muscles felt the first tweak of fatigue… and the toughest part of the race was yet to come. I hoped I had banked enough seconds.

So, mile 9.5 final came and the course flattened out. Of course after running downhill for the last 90 minutes on a downward slope, flat terrain felt like you were going up-hill.

If The Fonz ran a half marathon.

The 2:00 pacer (and her damn taunting sign) had pulled a little bit away from me, but I could still see them. By mile 11 my overall pace had slowed to 9:05 min/mile and I was feeling it. My growing withdrawals from the time bank meant that I had less than a 50- second cushion if I was going to break 2-hours.

I was breathing harder and I felt the blister with each step of my right foot. I was hurting.

I had to decide whether to slow up, stop and fix my shoe or just grin an bear it and run on.

An then I thought about the plane ride home. Did I want to cruise at 35,000 feet eating my tiny bag of peanuts grinning over breaking 2-hours or lamenting that I missed the mark by a minute or two.

I decided to grin and bear it.

Then my gut kind of rumbled. In the bad way. In the “there’s a chance I might puke” way. And as if the universe wanted to drive that point home, I looked over at the runner to my immediate left as she stopped mid-stride and proceeded to toss her cookies.

I slowed my stride for about 100 yards as I figured this was it… “game over” on 2-hours. Did I really want to risk doing a one-man off-Broadway performance of “Jason and the Technicolor Yawn” all over myself?  I guess I’d have to “try again”… again.

I didn’t have time to really answer that question because in the distance I finally saw it.

Screw it. Run on.

And if I puke?  Well I’ll just photoshop the race pics.

I took a deep breath and started running faster. No more looking at my watch and calculating my time. All I could do was focus on the finish line, keep running and hope I made it in time and without a protein spill. 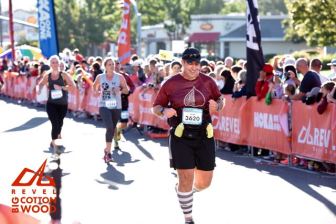 There was the finish line just ahead. I could hear the crowd. I took my headphones off and listened to the cheers. I had only about 100 yards to go. The length of a football field.

And then I realized the race clock showed the “gun time,” not my chip time (I was a little loopy at this point). I glanced down at my watch and saw my actual current time- 1:59:20.

I still had time.

And to my left I saw the 2:00 pacer (and her taunting sign). They were jogging slowly to the finish line (so they’d cross right at 2:00). She turned my way and uttered “You got this.” And I heard the announcer call out my name as I approached the line.

I smiled and clomped the last few yards. I did indeed “got this.”

Now REVEL had a camera recording the finish and if you watch me cross the line (at 58:27 of the video) you’ll see me let loose a rather pathetic yell of triumph (or maybe it was pain… or both). 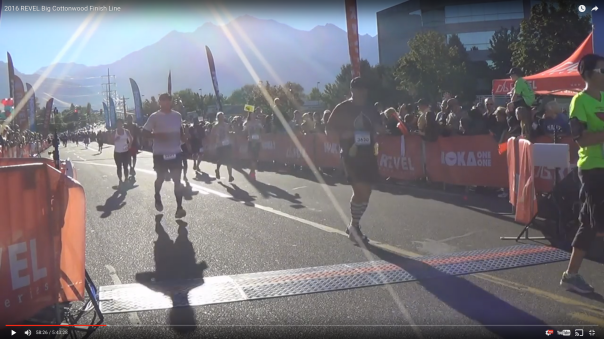 I had finally broken the 2-hour barrier… with just over 10 seconds to spare.

Now with that awesome time, I surely must have made the podium.

A PR and sub 2-hours…finally!

Nope. No way. Not even remotely close.

So, maybe I didn’t win the race. Maybe I only finished slightly higher in the top half than usual.

Didn’t matter. It was important to me.

After 7 years, I finally achieved something I had worked for so very hard. And I didn’t quit. And they can’t take that away from me. That’s all that mattered as I enjoyed my tiny bag of peanuts on the flight home.

So if at first you don’t succeed, try try again.

Even if it takes you 46 tries.