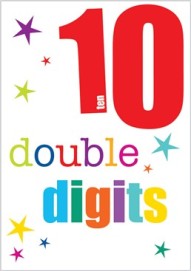 I remember way back when I was 9 years old (you know, when dinosaurs roamed the earth) and my 10th birthday was just around the corner.

I felt that reaching “double digits” was going to be a monumental feat. I had finally earned that “big boy” status. And I got to eat a stupid amount of birthday cake to celebrate that milestone.

This Sunday I will hit the double digits in a different way. This Sunday at the Skechers Performance Los Angeles Marathon I will run my 10th full marathon.

Now to many of my running “brethren” and “sistren” (okay I know it’s not a word, but you still understood it), 10 full marathons is just a drop in the racing bucket. I’ve got personal friends of mine who have run dozens, even hundreds of full marathons (they impress the hell out of me). However, that 26.2 mile trek still humbles this boy.

I know how to handle the 13.1 mile distance pretty darn well at this point and it doesn’t freak me out. When it comes to running the half marathon, I am really not worrying about “if” I finish, but rather “when.”

The full marathon is another beast entirely.

I have heard it said that you run a half marathon; you survive the full.

And to be honest, the full marathon distance has kicked my ass when I’ve run it in the past…

No matter my fitness level, no matter my game plan, I have always paid a visit to desperation alley sometime during the marathon and slammed face first into “the wall.”

Thumbs up for T2!

Sometimes, like at the 2014 OC Marathon, I was able to bounce back and still finish strong (it’s where I PR’d). Other times, the wheels just came off entirely and it took every bit of willpower just to keep moving and reach the end.

As my running coach told us this past week (as he tells us every year): “Respect the distance.”

So on Sunday, I will don my T2 race gear, lace up my running shoes and head to Dodger Stadium at 4:30am in morning for the daunting 26.2 mile trek from the “stadium to the sea.”

And when it’s done, I will once again be in double digits.

Time once again to be a “big boy.”

Posted on February 8, 2016, in General and tagged Los Angeles Marathon, Team To End AIDS, The Wall. Bookmark the permalink. 15 Comments.