While running the 2016 Los Angeles Marathon on Sunday I caught sight of a very fitting sign.

Nobody walks in LA, but they do run.

It said: “Embrace the suck.”

That perfectly summed up my race.

Now I originally had some reason to be optimistic going into my 10th full marathon. I was in pretty good shape physically, having just completed a 23-mile training run 3 weeks prior. And mentally I was raring to pound the pavement with my fabulous charity group Team To End AIDS (T2). Also I had reached my fundraising goal just 3 days before the race, so that was an added boost.

But to every yin, there has to be some yang.

On the downside I had been dealing with some issues with my right foot. A lingering blood blister on my arch kinda sucked. As did the growing callus on my right small toe. I also had developed a cough and headache in the days leading up to the race. Was it allergies, the start of a cold or just my nerves getting the better of me?

I guess we’d find out.

Cut to race day and I’m standing in the parking lot at Dodger Stadium surrounded by the T2 crew and 25,000 other runners.

The T2 crew (my running family).

The energy and anticipation pulsating through the crowd is something I always savor. A sea of dedicated souls anxiously awaiting the start. Every person is overflowing with determination, fear and hope.

It is the essence of the marathon.

And with that the horn went off. The crowd moved forward toward the start line.

NOTE: I’ll come back to this moment a little later. 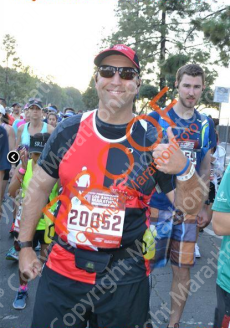 For me, the marathon started out quite well. I worked hard to keep a slower pace for the first few miles (going out too fast is a recipe for disaster). And I felt good. Real good, in fact. No signs of my headache and my right foot felt surprisingly okay.

We left Dodger Stadium and ran through downtown, Chinatown, Echo Park and were making our way up through Silverlake, Los Feliz and toward Hollywood. The mile markers flew by, I even missed one because I was in the zone and enjoying the race. At mile 8 I felt like a million bucks. I felt like a marathon PR could be in my immediate future.

And then my race economy collapsed.

I started feeling some friction in my foot… but oddly it was my left foot. In my entire 7 years of distance running I think maybe I’ve had a total of two or three small blisters on my left foot. A blister couldn’t be forming already, could it?

And then the real problem hit at mile 9.5.  I suddenly felt empty… like someone had pulled the stopper out of my energy bathtub and it all drained out. This wasn’t “the wall” (at least I don’t think it was) because it felt different. And I’ve hit the wall enough times to know its unmistakable awful feeling. Besides, the earliest I’ve ever hit the wall in a marathon was mile 16. This felt like something else.

I kept moving forward, slowing my pace and taking an extra long walk break. But to no avail. I was in trouble.

I remember seeing the sign for mile 12 and hearing my body go “Well, we only have to survive about one more mile and we’re done.” I had to remind it that we weren’t even at the halfway point. The blister on my left foot was also growing and each step on it was starting to hurt.

I was in real trouble. 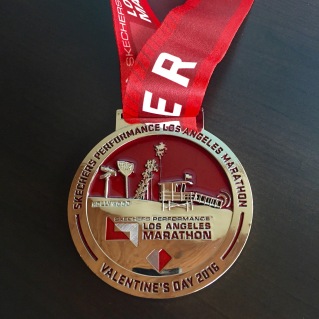 At this point, my only real course of action was to jettison my mental marathon instruction manual and improvise a new strategy with one and only one objective: finish.

One of our T2 crew is an experienced power walker and years ago he’d taught me how to power walk during my walk breaks. As I hit the halfway point I acknowledged that I’d just run a half marathon. And now I’d power walk one.

For the next 13.1 miles (from Hollywood to Santa Monica) I kept moving at whatever pace I could manage. Left foot, right foot, left foot, right foot. No matter what, I knew not to stop because if I did I wasn’t certain I would be able to get moving again.

I was a slow moving train, but at least moving in the right direction.

T2 had its cheer station at mile 15 where I got an emotional boost from friends. And it was around mile 16 that I saw the “Embrace the suck” sign. It became my mantra for the rest of the race.

I wasn’t going to just embrace the suck, I was going to friggin’ bear hug it and adopt it.

Sometimes it’s all you can do.

I knew the blister was still growing and my body was screaming for me to just stop, but I told it to leave me the hell alone… I was busy trying to finish a race.

Starting at mile 18, T2 had a coach every two miles (at 18, 20, 22 and 24) to check up on their runners. As I reached each one and told them of my predicament they all responded the same way. None of them knew I was hurting because I had a grin on my face. I joked with them that either I was indeed happy or I was so far into pain that it had circled back around to happy.

Eventually I found myself in a “painful” zen state. I didn’t really hear my music anymore and I wasn’t focusing on anything other than reaching the next mile marker… 22, 23, 24, 25.

After what seemed an eternity, I finally turned onto Ocean Avenue in Santa Monica and could see the Pacific Ocean. Less than a mile to go. With each painful step the end drew a little closer.

And then I saw it. The finish line.

I think that final half mile was the toughest because I really really really wanted to run, but my body was one big pile of hurt. My blister was almost unbearable, my back was screaming (exacerbated with each cough… yeah, that started up around mile 22) and my muscles were beyond tight. I really didn’t have anything left in the tank.

And now back to that moment I mentioned earlier.

After the starting horn had gone off, I was walking toward the start line and about to get my marathon on. Blisterville and Exhaustion City were still miles away. All was right with the world.

That’s when a hand fell on my shoulder. I turned to see who it was. It wasn’t a T2 member or one of my many other running friends who were running LA too.

It was a complete stranger.

He pointed at my shirt and made a reference to Team To End AIDS. It was simple phrase that resonated so deeply: “Thanks for your support.” And with that he was gone, off to run his race. But his message stuck with me.

All the training I completed over the last five months. All the fundraising I’d done. All the times I bugged my friends for donations. All the early Saturday morning runs. All the pain. All the sore muscles. All of it.

It made a difference to someone.

It was all worth it.

And now back to the finish…

With a quarter mile to go, I entered the final chute and saw a wall of fans cheering for all of the runners (LA does show up for this race). And I thought of all of the people who supported me along the way. And about that stranger at the start line.

In that moment I found the energy to run that last little bit. I cranked up my music as loud as it would go and fully embraced the suck.

It wasn’t fast and it certainly wasn’t pretty (I knew I was hobbling horribly), but I lumbered with all that I had and ran across the finish line… all the time with a huge grin on my face.

As I got my medal, I glanced down at my watch to see my finish time. 5:54:45. It was not a time to write home about. In fact, it was the slowest full marathon I’d ever run. I probably should have felt horrible about it. But I didn’t.

I achieved the primary goal of running a marathon. I finished. And I somehow finished strong.

And I wondered about that stranger. How did he fare on the marathon? I hope he PR’d and had the race of his life. Because he certainly made my race a memorable one.

Today I sit here “post-morteming” the marathon, thinking about what went wrong and how I can better my performance in races to come. There is plenty of room for improvement (there always is). I’ve got some serous work to do. But it’s work I want to do.

I look forward to my next race and also running the Los Angeles Marathon again next year (March 19th, 2017) with T2.

And if there is one lesson I will take away from yesterday’s race, it’s this. Marathons (and life) will throw you obstacles that may seem insurmountable. Sometimes the best way to get through it is just to embrace the suck and keep moving forward any way you can.