HANG UP THE PHONE PLEASE…

It’s a soapbox kind of day. Think of it as another “What Grinds my Gears” posts. 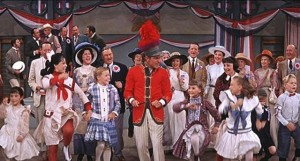 Robert Preston says “hang it the hell up.”

To put it simply, we’ve got trouble everyone.

Right here in River City. Trouble with a capital “T” and that rhymes with “P” and that stands for “phone.”

Most states have enacted policies regarding texting and driving or talking on cellphones and driving. For whatever reason, people can’t seem to put their phones down when they get behind the wheel. Therefore the government has stepped in and made it illegal. “Distracted driving” is indeed bad.

I’m here wondering if that scope shouldn’t be broadened to include gyms. 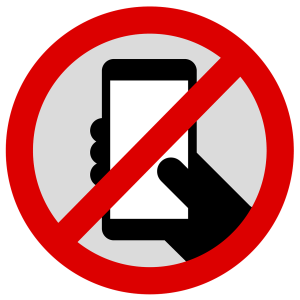 Unplug while you sweat.

I’ve been a member of LA Fitness for almost 19 years now. I typically hit the gym 5 days a week (M-F), either to lift weights, run on the treadmill or do other cardio work.

And I’ve noticed at my particular gym (it’s a big one by the way) that cellphone usage by people during “workouts” has steadily increased over the years. You might say it’s now reaching epidemic proportions.

I’ve seen people using their cellphones on the racquetball courts (while supposedly playing), while on weight machines and even right by the lap pool. The worst offenders though are those on the cardio machines: Treadmill, elliptical, stationary bikes.

Now I know running on the treadmill can be a little boring to some (personally, I’m fine with it). That’s why my gym has TVs at each machine that you use with headphones. Or you could listen to music on your iPod. Heck I’ve even seen some people try to read on their Kindles (the way Shakespeare was meant to be read).

But there are people who seem to be so scared to be “unplugged,” even for a moment, that they think it’s the perfect time to text some juicy gossip or “reach out” and call every single person on their contact list.

HAZARD AHEAD: For starters, it’s potentially dangerous. If you’re splitting your focus between texting/talking and another activity, you certainly aren’t paying enough attention to the important task at hand. It can be deadly if you do it while driving. Not so much at the gym, but you still can get hurt. 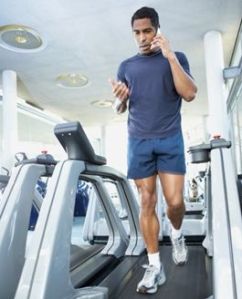 I’m fine as long as you don’t ask me to chew gum too.

I’ve witnessed several people texting/talking while “working out” on treadmills drop their phones, only to see it hit the belt and launch like a wingless bird. And to make matters worse, the “phoneless” fools quickly turn, forgetting they are on a moving belt. It’s made for some “Three Stooges” like moments of painful hilarity. And there are those who are so engrossed with their phones that they forget they are on the aforementioned moving belt and accidentally step on the treadmill’s frame. This leads to another pratfall… more akin to Benny Hill, I think.

FUTON FUTILITY: For those of you who have ever had a futon, you know that it’s a device that doubles as two things: an uncomfortable sofa and an equally uncomfortable bed. Basically it doesn’t do either thing particularly well. The same holds true for working out while on the phone. Either you’re working out so hard that you can’t really enunciate, or you lessen your workout (in order to be heard) to the point that you’re not really working out, but rather just going through the motions. I’ve even seen people just stand still on treadmills or ellipticals and have 10-minute conversations. I don’t think they’re able to feel the burn.

CLOSE QUARTERS: Here’s one that really bothers me personally. It’s one thing to talk on a phone while you are away from prying ears (they can pry, can’t they). It’s another thing when you’re squashed together like sweaty sardines. At most gyms, treadmills or ellipticals are stacked next to each other, so we all have very little “private space.” And some people don’t seem to give a rat’s ass about yours.

Yup, you get to hear your temporary gym neighbor ramble on until they use up all of their cell plan minutes.

That’s why gyms require you to wear headphones, so the poor bastard next to you doesn’t have to hear your godawful taste in music (hey, mine is bad too). Well, I’d rather hear Taylor Swift “ad nauseum” than be a “forced eavesdropper” on half of an electronic chat session. And unfortunately, no matter how fast I run on a treadmill or how hard I “ellipticate” (ooh, made up a new word) I won’t get any further away from your self-important conversation. Let’s be honest, I’ve never heard a person on a phone on a treadmill recite a beautiful poem or come up with the equation for cold fusion.

This is one of the main reasons why the FAA hasn’t allowed people to use cellphones on airplanes. Simply because we’d have some air rage where people might (forcibly) ask the person on the phone to step outside… at 30,000 feet.

So, is that enough reasons?

Apparently my gym agrees that talking on the phone while working out does no one any good. As a result, they have enacted a “no talking on cell phone” policy.

Actually, according to the manager it’s more like a “gym etiquette suggestion.” And their enforcement has been a little spotty at times. But at least it’s a start.

And when you come down to it, can’t that phone call wait until your in a more private location… say like waiting in line at Starbucks.

Unplug… and Run on!