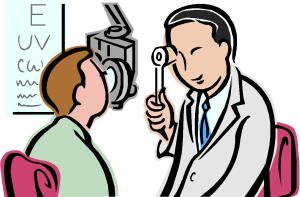 Why yes, you do have eyes.

Just like how “Harry Potter and the Deathly Hallows” cut its story down the middle, I too chopped my “Two-fer” trip to a pair of doctors (regular and eye) into a 2-part saga.

Yesterday you got a gander at part 1.

So, here’s the latter half of my tale… featuring a few less wizards than Harry Potter.

For those of you who know me, I’ve prided myself on having some killer “baby blues.” Now this isn’t in reference to their ability to woo the ladies throughout my life (okay, mostly not), but rather to the fact that I had some pretty mad vision skills.

Ever since I was a little kid, I’ve had 20/10 vision, meaning that what a normal person sees at 10 feet I see at 20 feet. It was pretty sweet. And given all of the headaches I’ve had with my teeth in my life, I concluded that awesome vision was my karmic reward for spending so many hours in the dentist’s chair.

I figured I was one step away from having X-ray vision… you know the kind of super-vision you get from wearing the glasses advertised in the back of 1970s comic books.

And while growing up lessened my super-power a tad… in 2007 the eye doctor said I had slipped to a slightly less heroic 20/15 vision… I was still thrilled that I never had to figure out how to ram corrective contact lenses onto my eyeballs. Ewwww. 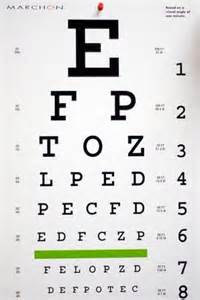 Well, it seems that 40+ years on this planet appears to be a tipping point where lots of us adults start to have a natural decrease in our ability to focus up close. Reading a newspaper (comic book in my case) transforms into an exercise in squinting and holding the book at arm’s length.

I mean Steve Austin (the Six Million Dollar Man to those of you who don’t know the reference) would probably come to me for help identifying those bad guys in the distance.

Apparently, my eyes are not quite as bionic as I thought.

Over the last few months I’ve noticed words on the page (print or Kindle-wise) have lacked their usual crispness. Yup, I’d started adding my own little personal “soft focus.”

Hence the overdue trip to the eye doctor.

Oh, and glaucoma runs in my family (shit), so I knew I needed to make sure my eyes were indeed healthy.

Unfortunately, my wonderful Blue Shield health insurance doesn’t cover eye exams (of course it doesn’t). Well, it does cover pediatric vision, but apparently “acting like a child” doesn’t qualify you. So any trip to the eye doctor would be a wonderful fully “out of pocket” experience.

I can see into the future!

So, I opted to go the Kirkland route. Yup, I went for an eye exam at Costco. I’d actually heard good things about their services.

And no, it wasn’t like attending law school at Costco (yes, that would be an “Idiocracy” reference).

Turns out, the references were right. The eye doc at Costco did a really good job… and while I was there I also got a hot dog & soda for $1.50 (another good deal).

But back to the exam.

I spent about 30 minutes looking in various machines, reading off rows of letters and saying whether “1 or 2” looked more in focus.

And then there was the machine that puffed in my eyes, not to mention the one that took a photo/scan of my eyeballs.

I’m not sure, but I do think Oscar Goldman and Dr. Rudy Wells were intently watching behind a one-way mirror (yes, another Six Million Dollar Man reference).

In the end, it was mostly good news. My vision is still 20/15. The structure of my eyes looked really good in the scans/pictures (I opted not to get the 5x7s) and the pressure on my eyeballs was well within limits (suck it glaucoma).

In short, the doc said my eyes were in excellent condition. Cool.

But what about the “mostly?” 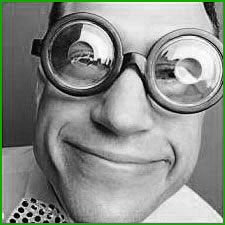 Well, Father Time did decide to screw with me a little bit.

And like the rest of the population, a trip past 45 means that my close-up vision is starting its natural (and expected) decline. The doc said I can start wearing “readers” if I feel the need (eventually it’ll be a necessity) and wrote me a prescription for 1.25 magnification glasses.

Now these are simple magnification glasses. I could go get some cool frames from a retail store, or just pick up a basic pair at any pharmacy (hell, they even have ’em at the dollar store).

I do think I’ll pick up a pair that fits and looks pretty good to have when I need ’em. And Lindy made me promise that she gets to choose the frames, since she’ll be the one seeing them on my face.

I am a bit bummed that I actually need glasses, but on the upside I can now do that cheesy movie reveal where I slowly take off my glasses for dramatic effect.

Besides, Harry Potter wore glasses and he turned out okay.

P.S.- I’m still waiting on the results of my blood tests from my physical, so it does look like there will be a third part to the doctor trilogy in the near future… or more like an epilogue.

Posted on December 5, 2014, in General and tagged 20/10, Costco, Eye Exam, Glaucoma, Idiocracy, Six Million Dollar Man, X-Ray Glasses. Bookmark the permalink. Comments Off on THE “EYES” HAVE IT….