This last Saturday of April had me running solo for my final “taper” run before the OC Marathon next Sunday. 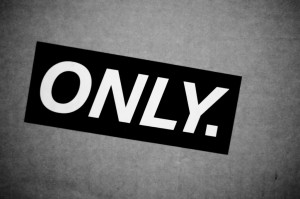 It was a fun and leisurely jaunt in Griffith Park and around Glendale on a beautiful spring morning (fortunately the rainy weather left the area earlier than forecast). But rather than talk about the run itself (remember, fun and leisurely) I’d rather bring attention to one word from a conversation about the run that I had yesterday.

On Friday, one of my friends asked how far I was going to be running on Saturday. Without skipping a beat, I matter-of-factly replied:

They rolled their eyes at me (my friends seem to do that rather often) and repeated one word: “Only?”

You see, the reason I like saying “only” like it’s no big deal is because not too long ago in my life it was a big deal.

Back in the fall of 2008, when I first started training with Team to End AIDS (it was called AIDS Marathon back then) the furthest I had EVER run at one time in my life was 6.2 miles (I’d done a few 10Ks). That’s it.

As our group of 100 or so terrified newbie runners crowded around our running coach (Coach Scott Boliver), he broke down our training schedule for the entire marathon season. Our miles were going to increase incrementally for the first several weeks… 3,4,5,6,7 and so on.

No one was freaking out yet… yet.

As the numbers started getting higher and higher, climbing into the double digits (10, 12, 14), the trepidation on our faces grew with it.

And then Coach Scott said that after we did a long run of 14 miles one week, we’d follow it up with a short recovery run the next week of “only” 8 miles.

“You laugh now, but if you stick with your marathon training there will come a day when you add the word ‘only’ when you’re referring to 8 miles.”

And damn if he wasn’t right.

It didn’t happen overnight; it took a lot of time and effort, but eventually that day did come for each of us.

So five years later I regard an 8 mile run as the demarkation point between a short and long run.

Yup, 8 miles is what I consider my “shortest long run” (or is it my “longest short run”). For me, anything under 8 miles has no business being scheduled on a Saturday morning.

Now for some of you 8 miles might seem long or conversely rather short (just like what’s a slow pace for one runner might be blisteringly fast to another).

The point is, if you stick with something long enough and work at it, what once seemed difficult (or next to impossible) will become doable… or maybe even “only.”

So, today I did a fun “short” Saturday run jamming out to my iPod. It was only 8 miles.

Oh, and you’re still allowed to roll your eyes. I’m used to it by this point… and it makes me smile.

Posted on April 26, 2014, in General, Motivation and tagged 8 Miles, Only, Team To End AIDS. Bookmark the permalink. 11 Comments.