If you’re a runner or a fan of the marathon, you know Patriot’s Day (the third Monday in April) is tomorrow and that means one thing… the annual Boston Marathon is being run.

While this historic race has always gotten plenty of public recognition, last year it was thrust into the spotlight in a way that no one could have (or wanted to) imagine.

The tragic (and also heroic) events surrounding the 2013 Boston Marathon will not soon be forgotten.

The pain and loss of those caught in the blasts.

The heroic men and women who willingly put themselves in harm’s way to help those in need.

This past week the media has been flooded with stories about the anniversary of the event, the recovery of those impacted by the bombings and how the Boston Marathon will run this year… and run strong.

So many tales, so many emotions. I encourage you to read the stories when you come across them. It is a testament to the strength of the human spirit.

And as I prepare to turn on the TV tomorrow to watch everyone cheer “Boston Strong,” I just wanted to briefly share what the Boston Marathon means to me.

It’s the Indy 500, Super Bowl, World Cup and Final Four of running.  It may as well just be called “The Marathon.”

If you’re a marathon runner, you want to run Boston like no other race… even NY is a distant second (sorry Big Apple, we love you too though).

You don’t sign up for Boston. You don’t put your name in a general lottery. You qualify.

Note: You can also enter via certain charities, but be prepared to work at it.

When I first started distance running, I looked at the qualifying times for my age… I wasn’t even close.

I’m much fitter and faster than I was five years ago. And now that I’m 45, I’m in an older (aka slower) age bracket and the requirements aren’t as tough… 3 hours, 25 minutes.

Jeez, I’m still not even close. 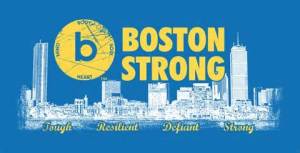 We love you Beantown!

As for tomorrow’s race, I’ve got friends and family in Boston. Some running, like my sister-in-law Bonnie and my friend Lisa. Some cheering, like Elizabeth.

I wish I could be there tomorrow running, volunteering or cheering. Instead I’ll just have to support the race from afar and cheer on all 36,000 men and women pounding the pavement in Boston.

Tomorrow you are the marathon.

Run strong Boston… and Run on!