Every once in a while you come across someone with such a strong character and positive outlook that you’re naturally motivated by them. These are the kind of people who have shown strength during difficult times and come out shining on the other side.

I want to introduce you to one of those people who has inspired me.

She’s in Boston today, although she’s not running the marathon (she did do the 5K on Saturday). Instead she’s a face in the crowd, cheering on the 36,000 men and women running through the city’s streets.

The story of her personal struggle and determination, however, has influenced more people than she knows and I count myself among them.

Her name is Elizabeth Gray. 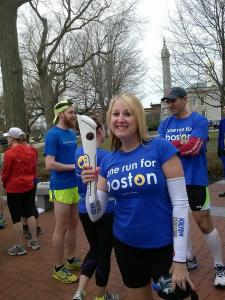 Running to help others!

Oddly enough, Elizabeth found me first. Apparently, this lady who hails from South Carolina was intrigued by my quirky and curiously-named blog and gave it a read. She e-mailed me back in February about our mutual love of running and we started chatting back and forth. She too was starting up a blog “Running and Romance” (give it a read) and it was through our correspondence and reading her posts (I’m a happy “follower” of hers) that I learned what a truly remarkable lady she is.

A former marine (“Semper Fi”) and a loving mother of two, Elizabeth began her own personal marathon several years ago. Unfortunately, she was living through an abusive marriage and enduring the constant emotional and physical trauma of domestic violence.

In August of 2010 she found the courage to break free from the situation and start fresh. Focusing on her family, friends and her faith, Elizabeth emerged from her personal prison and took off running (figuratively and literally).

Elizabeth has been running for around five years now with several marathons and over a dozen half marathons under her belt. And as she states in her blog, “My dedication to running has led me in numerous directions.”

In addition to running like a woman possessed, Elizabeth started up a charity “Marathons Against Domestic Violence” and is also finishing up a book about her experiences (I’m expecting an autographed copy).

On top of that, she also got involved with One Run for Boston, a charity that sponsors a cross-country relay race from Los Angeles to Boston, raising money to help the victims of last year’s tragedy. This year the charity has raised in excess of $430,000. 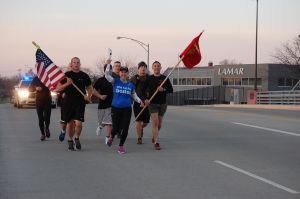 Running with the boys!

Elizabeth drove from her home in South Carolina to Dayton, Ohio earlier this month to be the lead runner for stage #241 (there are 336 stages total). So with 10 marines running behind her, Elizabeth carried the baton 10 proud miles before handing it off to one of her fellow relay runners. But she wasn’t done there, as days she later jetted off to Boston to also run in stage #335 and participate in the festivities and ceremonies that followed, including the group photo for this week’s cover of Sports Illustrated. Yup, she’s an SI covergirl (at least she says you can see the top of her head in the photo).

Check out this piece from the local news on Elizabeth’s achievement: 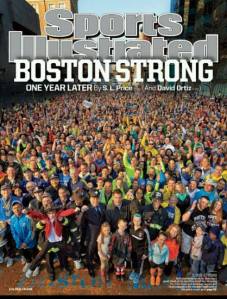 And this past weekend she made yet another trip back to Boston to run in the 5K race and stand today amongst the throng of supporters cheering on the participants of this year’s Boston Marathon.

For her efforts to increase awareness about domestic abuse, Elizabeth has also been named “Woman of the Year” by Sistercare, a South Carolina organization dedicated to supporting survivors of domestic violence.

I’m very thankful I’ve gotten to know this tremendous lady and am in awe of the courage, determination and indomitable spirit that she possesses.

Posted on April 21, 2014, in General and tagged Boston Marathon, One Run for Boston, Running and Romance. Bookmark the permalink. 1 Comment.