“DON’T MEAN A THING IF YOU AIN’T GOT THAT BLING.”

This year’s model will be wearing “blue.”

I had a non-running friend recently tell me that they thought “finisher’s medals” were getting out of hand and did we even really need ’em in the first place?

I tried not to get huffy. After all, everyone is entitled to their opinion. Of course if I had had a finisher’s medal handy I might have clubbed them to death with it (some of them are rather large).

But I wanted to give their opinion some thought.

Saturday morning I’ll be pounding the pavement for 13.1 miles down and back along the “Avenue of the Stars” at the Hollywood Half Marathon. And once I cross the finish line and stop my GPS, one of the wonderful race volunteers will hang a blue star-shaped medal around my neck.

Because you won the race, right?

Let me know when you get to around 1,800th place, then you’ll be in the ballpark.

As we know, every single finisher of the race will get their own personal bit o’ bling in the form of a finisher’s medal, regardless of whether they break the tape or barely beat the road sweepers.

I didn’t know “purple” was for 7th place, did you?

Let’s face it, everyone loves a little recognition. When we were kids we got participation ribbons or trophies for our sports teams and school projects. Even if our team put up a “Goose Egg” in the win column, at the end of the season pizza dinner we’d all get that little trophy in recognition for showing up and giving it the “old college try”… or since we were kids, wouldn’t it be the “old grade school try?”

And medals are sweet. Olympians currently get ’em for finishing in the top three spots of their event. Even Luke Skywalker got a cool medal for blowing up the Death Star.

No, I don’t think we need them.

But I think we deserve them.

Now before you worry I might hurt my arm patting myself on the back, let me explain.

Running a race is a choice. We’re not forced to run (at least I don’t think we are). As runners, we decide that we are going to do a race and willingly commit to it. 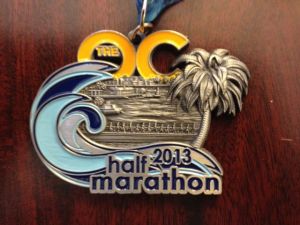 Elite runners do it for the competition, the chance to win and to enjoy the spoils of victory.

For the rest of us, our reasons are varied… and very personal.

But whatever your rationale, running a 10K, half marathon or marathon typically doesn’t come without dedication and sacrifice, including: early morning runs, watching what you eat, sore muscles/other assorted aches and on and on. 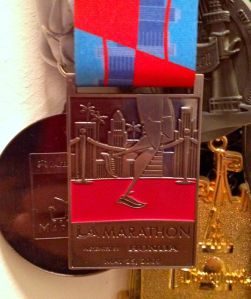 The finisher’s medal is symbolic of the obstacles faced and overcome. It’s why we get medals at the end of the race, when we’re tired, sweaty, sore and most likely in a bit of pain.

That colorful bit of bling hanging from a ribbon signifies a tangible and permanent reminder that we stared doubt in the face and did it anyway.

When I was given the finisher’s medal at the end of my first marathon, I couldn’t stop staring at it. It wasn’t the prettiest medal I’d ever seen, but in that moment it was perfect. It glowed. I’ve heard similar stories from many people after their first race.

I had been given (let me restate that… I had “earned”) an everlasting token of a moment in time when I pushed my body and spirit. While it doesn’t have any inherent monetary value, it’s priceless to me.

Did I need that medal (and those that have followed)?

No. I’d still have the memory of the accomplishment even if I went away empty-handed.

But I think I deserved a little gift as a way to remember it, kind of like how we tend to pick up souvenirs from a memorable trip or past moment in our lives.

So many medals, so much “clubbing” to do.

And whether you put it on the mantle, place it on a shelf, stick it in a drawer or hang it on the wall (like I do with my medals), it’s there for you to enjoy whenever you (or your friends, if you force them) want.

So back to my friend. I don’t begrudge them for doubting the need for medals. In fact I should just show them my medal hanger and explain what they mean to me.

I think then they’ll understand.

And if not, I can just snatch a medal off of the wall and club them to death with it. As I mentioned, some of them are rather large.

(I’m not done with bling yet… check in tomorrow for more on medals).

Posted on April 2, 2014, in General and tagged Finisher's Medals, Hollywood Half Marathon. Bookmark the permalink. 14 Comments.