← PLANNING AHEAD… WAY AHEAD
OCHO IN THE RAIN, SORT OF… →

The other day I was thinking about who was the first sports fan to ever hold up a sign. For some reason I have this image in my head of some toga-clad Roman sitting in the upper deck of the Coliseum hoisting up a banner that reads, “Go Lions!”

As a whole, sports signs are a lot of fun. I enjoy watching NFL, MLB or NBA games and seeing all of the witty banter and biting insults that fans scrawl onto a big piece of over-sized cardboard. If you’re ever curious as to “Who really sucks” or wondering about the multitude of acronyms that can be created using just the letters “E.S.P.N.” you need go no further than scanning the stands at a sporting event.

Well, signs are not just limited to team sports, but rather they have become quite prevalent at marathons, half marathons, 10Ks and other running events. As runners pound the pavement doing their best to ignore side stitches, aching feet and blisters, seeing a sign with an encouraging message or joke (even if it’s bad) is a very welcome diversion.

From the generic “Keep on Running” to the more elaborate “Channing Tatum is Waiting for you at the Finish Line with a Puppy,” each spectator sign we read is a little reminder that you fans support our insanity and gives us a little extra push… seriously, we really appreciate it.

The funniest sign I ever read actually helped me find a second wind, which was good because I needed the extra air to let out a huge laugh. I was in the middle of the 13.1 Atlanta Half Marathon (on a hilly wooded section) and needing a boost if I wanted to keep on pace. I looked at a tree and there was a banner nailed to it. Here’s what it said:

“Kevin, it’s called a half marathon because it’s hard. If it was easy they’d call it your mom.”

Now I don’t know who Kevin is, or his mother for that matter… but I must thank them both, along with the prankster because for that one moment, that sign was the single funniest thing I had ever seen. I cracked the hell up and had I been drinking Gatorade certainly would have done a spit-take. And by the time the laughter had transformed into a simple smirk, I was rejuvenated.

Laughter is indeed the best medicine.

Oh, and for the record, I’m sure Kevin’s mom is a saint (just like “Dorothy Mantooth”).

And since I’m on the subject of witty signs, let me share just a few of the ones I’ve seen at races.” 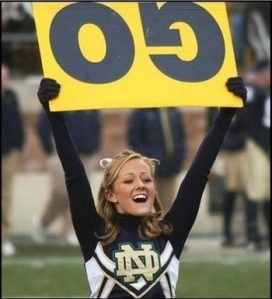 “Your Feet Must Hurt Because You’re Kicking so Much Ass.”

“Your Marathon Will Last Longer than Kim Kardashian’s Marriage.”

Oh, and let me throw out just a few running nuggets of “sign creation” etiquette…

If you’re going to create a sign cheering on just one person or group (“Go Bret” or “Way to Go Ashley”) just know that thousands or tens of thousands of people will see that sign long before Ashley turns the corner. So why not make a fun generic message on the flip side of the sign and then just turn it to your personalized note when you finally do see Ashley.

If you’re going to make a sign that says something along the lines of “You’re Almost Done,” please be sure to place yourself near the very end of the race. Seeing that note at mile 18 of a marathon is a painful reminder to runners that they are in no way “almost done.” If you look closely you might actually see a runner or two start to cry.

Signs typically don’t come with grammar/spell-check, unless Sharpie has come up with some cool new magic marker that I know nothing about. So, please type your slogan into a computer before you go all calligraphy-like to make sure it’s spelled properly and uses the correct version of “there,” “their” or “they’re.”

Finally, any funny sign held by a child 10-years-old or younger is automatically 43% more hilarious and guaranteed to get a smile from every runner who goes past. I swear if I see an 8-year-old holding a sign that reads, “Don’t Poop Yourself” I will laugh so hard I might just inadvertently poop myself.

And then I won’t have a chance in hell of impressing Kevin’s mom. Although rumor is she’s not too picky.