← FINDING FRAZZ…
THE FORECAST IS FOR “FUN” → 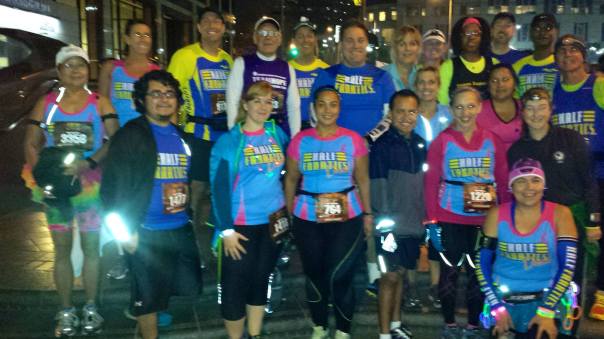 In college I didn’t go Greek; rather I stayed in the dorms all four years serving as a Resident Assistant (in charge of 72 Freshman/Sophomore students). Sure it was hard work, but quite rewarding to help others. Oh, and I got free room, board and tuition… so Woo-Hoo!

So, while I was ecstatic to graduate without owing a penny in student loans, I always wondered what it would have been like to be in fraternity… to know that I could run into fellow brothers (or sisters) anywhere around the country or recognize someone wearing our emblem and have something in common.

Well, I did finally join a fraternity. It just took me twenty more years.

And did I mention it’s for runners only?

Last October I happily became a member of the Half Fanatics… my running fraternity.

Back in 2003, three running addicts: Steve Yee, Chris Warren and Tony Phillippi founded the Marathon Maniacs, a group dedicated to bringing together those of us who have no choice but to run a ridiculous number of races. Either it was thinking “there’s strength in numbers” or “let’s get all of the nuts together to see how many of us there really are.”

Well, the group grew in popularity and in 2009, they created their sister fraternity (or is it a sorority) the “Half Fanatics,” for those who prefer the 13.1 to the 26.2.

And why do I consider them a “fraternity” as opposed to a running group? There are a few reasons.

First and foremost, you can’t just plop down a membership fee and join. You’ve got to earn your way in. Fraternities have “hell week.” But the Fanatics (and Maniacs) must show their mettle for far longer than a mere 7 days.

“Thank you sir, may I have another.”

(The same rules apply for the Marathon Maniacs, but they have to be full marathons). 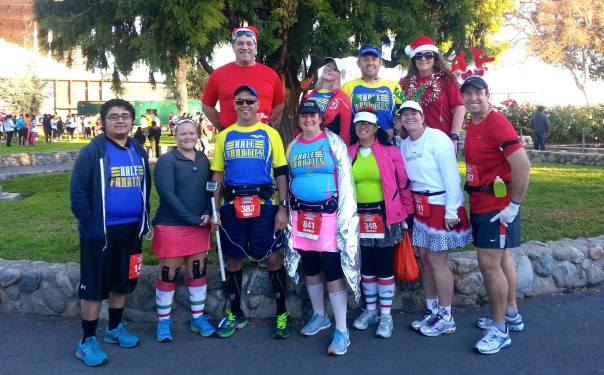 Oh, and like a fraternity, you can make your way up the pecking order by working harder. Running more races in a certain time frame (check out the criteria) allows you to “moon up” for the Fanatics and “star up” for the Maniacs. I’m currently orbiting around “Uranus” (good ahead and laugh; I’ll wait), but later this year I should be moving up to either Saturn or Jupiter.

Once you do qualify for the group and pay your membership dues you earn the right to wear “the colors.” Most people I know in the group rush to purchase a jersey and share their “Half Fanaticism” or “Marathon Maniac-ness” with the rest of the running community at their next race.

And everyone granted entrance into the Fanatics or Maniacs gets bestowed their own unique fraternity identifier.

Okay, we don’t get funny Animal House frat names or “call signs” like Top Gun graduates. It’s more like “The Stonecutters” from The Simpsons, where we each get our very own number (Mr. Burns was Stonecutter #29 for those of you wondering). I am HF #5256 and whenever Fanatics or Maniacs greet each other, they always share their number. FYI, as of 2/23/14 the Fanatics number 6,558 strong and the Maniacs are about to cross the 8,800 mark. That’s a lot of crazy runners in our ranks.

And for those who love both the half and full marathon distance (like yours truly), you can become a “double agent” sporting dual numbers and identities. I’m scheduled to run 3 full marathons in 90 days (LA in March, Orange County in May and San Diego in June) that will allow me to become a double agent… be sure to let “M” and “Miss Monnypenny” know that I’m on the case.

So, I’m sure there are those of you out there wondering what do you get for all of the hard work, membership fees and club protocol? Well, there are discounts for certain races, but that’s not the reason people join. We join to be part of a club, an exclusive network made up fellow runners who are just as passionate about running as I am. 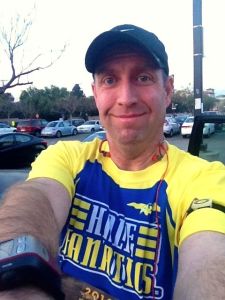 A Half Fanatic selfie

The day I joined, I signed in on the Half Fanatics Facebook page and was personally greeted by over 100 members. If I have a question about anything running/race related, I can throw something up on the page and within a matter of minutes I’ll have a multitude of answers. We talk to each other; we share stories both tragic and triumphant and cheer each other on. I’ve already made several new friends thanks to the Half Fanatics.

When a race is scheduled, we locate other members to meet up with ahead of time for group photos or to carbo-load the night before or grab a drink after the race. I won’t qualify for the Marathon Maniacs until June (at the San Diego Rock ‘n Roll Marathon) but I’m already making plans to rendezvous with two other future-members right after the race so we can celebrate our initiations together.

On my first official race as a Half Fanatic (the Atlanta Half Marathon last Thanksgiving), I proudly put on my tech “fraternity” shirt. And even though I was 2000 miles away from home and at the race by myself… I wasn’t alone. I chatted with several Half Fanatics before the race, sharing info about parking and the brutally cold temperature (a balmy 22 degrees). And during the race I hit a remote stretch of road that was only dotted by the occasional spectator. I can remember running past one person (who I didn’t know) when I saw that he was holding a sign reading “Go Half Fanatics” and he cheered me on like we were old friends. See, membership has its privileges.

Yup, I love being a Half Fanatic (and can’t wait to become a Marathon Maniac).

Now, if we can just come up with a secret handshake.