Ever since I started distance running back in the fall of 2008, I’ve come to the harsh realization that my feet are a bit of a mess. How big of a mess you may ask? Well, enough that I feel the need to break it down into chapters. Fortunately, they’re fairly tame… no rampaging fungi stories or pics, I promise.

So now that you know you won’t have to suppress the gag reflex, let’s talk about my feet. 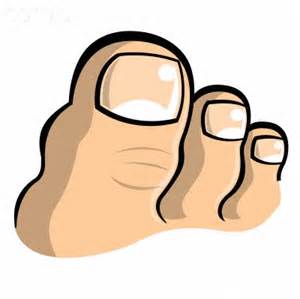 (Yes, there will be two parts on this… kinda KILL BILL-like)

Toes. We’ve pretty much all got ‘em. Typically ten of ‘em. They aid us in traction, balance and help keep pedicurists gainfully employed. They feel like the less useful and less attractive cousins to our fingers. And other than stubbing your toe, which painfully reminds us they’re present, toes typically stay hidden in your shoes and fly under the radar.

For the most part, my toes are pretty typical. Five on each foot. My second toe is a hair longer than my big toe, which is not uncommon. There are stories that people with a slightly longer second toe have Celtic origins or descend from royalty. I’m cool with that. If Arthur can be hailed as King of Camelot by pulling a sword from a stone, why can’t my long toe at least earn me a knighthood?

But all is not well in the kingdom of Scott’s toes.

My first problem stems from the third and fourth toes on my right foot… you know, the piggies that respectively “had roast beef” and “had none.” Due to forces beyond my control (meaning I have no idea why) my roast beef toe slightly rests on top of his roast beef-less neighbor, like it’s rubbing that fact in his face. Not a problem at all with my day-to-day tasks, like walking from A to B, but when it comes to running and especially distance running, it creates nasty rubbing, blisters and dead skin. So, ouch.

After a few weeks of this re-occurring ouchiness I went to the podiatrist (“foot doc” to you and me) in search of a solution. He initially gave me two answers, one sucking worse than the other. First off, they could operate on one of the toes, in essence shortening it and eliminating the rub. Surgery costs aside (not good when you’ve got a big deductible like me) it would have necessitated me being off my foot entirely for a week and no running for well over a month. So, no.

Option two was for him to “break” one of my toes and reset it so it wouldn’t be a problem. It was again considered a surgical procedure and on top of that I would have been on crutches and unable to run for over two months. Oh, and it’d hurt like a bitch. So, hell no!

Or the doc said I could just get a toe guard for a few bucks at the pharmacy to keep the piggies from rubbing. Hey now! That sounded like a much better, cheaper and less “breaky” answer. I figure I’d go with the solution behind “Door number 3.”

Unfortunately, those toe shields didn’t work as well as I had hoped, as they kept sliding when I ran. And it was next to impossible to try and tape that piggy down. Downtrodden, I walked into a local running specialty shop looking for a new kind of toe guard and not expecting to find much.

And that’s when I saw them. Ugly and beautiful at the same time.

Hoods for the piggies!

The toe sock. The brand name said “Injinji.” I had no idea what that meant at the time. By the way, here’s what it means according to the Injinji website:

“Injinji” pronounced (In-gin-gee) and is an African term that describes when a drumming circle reaches a climax, the peak in the performance, when all of the participants are at one with the rhythm, when everyone hits a stride and there is unison among all.

So, there you have it.

If a regular sock is like a mitten for your feet, these odd-looking bad boys were proper gloves for your ground-floor fingers. And you have to remember this was before five-fingered shoes went mainstream, so the idea of seeing anything for you feet with toe compartments was strange. Still is.

I bought a pair and went for a run 5-mile run. The next day I went back and bough a half dozen pairs. Yeah, they worked that well.

I had saved myself from costly and painful surgery and all that was required was for me to wear some funky socks that no one would ever see. However, I made sure everyone saw them. I found it oddly satisfying to remove my shoes to show people my “freak socks” and the story behind them.

My running sock drawer (yes, I have one) has become exclusive Injinji territory and I have so many pairs I have to wonder if they’ve started breeding on their own when I’m not looking.

So it seems I found an awesome solution to my toe problem and all was right with the running world… yes?

I did say earlier the overlapping piggies was my “first” toe problem. Apparently, not the last.

But for that tale you’ll have to tune into the next installment of the “Freaky Foot Chronicles.”