“Change comes from within.” -Anonymous

Change is hard. Change takes time. Change hurts. Change is to venture outside your comfort zone and into the great unknown.

Let’s face it. Change is scary as hell.

We often will tolerate bad jobs, unfulfilling relationships and unsatisfactory life situations simple because we’d rather deal with that damn devil we know as opposed to put forth the effort to do something about it.

“What if we make things worse?”

To that I say, “Nothing ventured, nothing gained.”

Think of the great achievements in your life. How many came about without you pushing yourself to your limits… and sometimes beyond.

Change is possible. You just have to want it. Badly.

This motivation needs to come from within, something that makes you stand up and say “Enough.”

The catalyst for change can be just about anything… but it needs to be personal, something that hits you and gets your attention.

For me, it was a single photograph.

The photo in question was taken on July 18th at ComicCon in San Diego. It was the day after a 22-minute cutdown of NECESSARY EVIL: SUPER-VILLAINS OF DC COMICS, the feature-length documentary I had co-produced, screened in front of almost 1,000 screaming fans.

The night before was one of the high points in my life… or at least in my career.

But the utter exhilaration I felt the night of the screening was matched by the personal low I felt when I saw that picture after returning to LA.

Six months of long days and nights of work, the stress of production and a poor diet consisting of too much fast food (who has time to cook) had clearly taken their toll on me. And on top of it, for the first time since I started running in 2008, I got knocked out of my running regimen. By the time ComicCon rolled around, I had barely run in almost two months.

I could hardly believe that guy in the photograph was me.

There I was… weighing 252lbs, stretching size 40 jeans and wearing a XXL shirt trying in vain to hide my expanding gut.

That photo got my undivided attention.

My life was out of balance. All work and no “play” had made Scott a fat boy.

First off, I rededicated myself to running. Those first few weeks were really tough as the pace and distances that used to be easy left me winded. But little by little, I got better and got my wind back.

Secondly, I started cross-training 3 days a week to supplement my running. Nothing crazy, just weight training and time on the elliptical machine.

Thirdly and most importantly, I changed my diet. I have admittedly never been a good cook. When in doubt (which was most days) I turned to takeout and fast food. My typical meal consisted of a burger, fries and diet coke. No longer.

There’s another old saying that you can’t out run a bad diet. Damn straight. If you want to lose weight, get in shape and be healthy, it all starts with the type of gas you put in your body’s tank. I switched from “garbage” to “healthy.”

(Note: I’ll tell about my runner’s diet in another post down the road.)

I didn’t flip on the TV as much. I got up earlier (which also meant going to bed earlier). I prioritized the other aspects of my life and found ways to be a little more efficient. I made the time and used it to change my habits and find my balance.

And damned if it didn’t work… slowly at first, but it worked. Two pounds, then four and then six. My pants started fitting better; my face started thinning out; my running pace got a little faster and I could go a little longer.

I stuck with it.

Pretty soon, others were noticing the change and commenting on how good I was looking.

I stuck with it.

As good as it was to hear people shouting kudos in my direction, I was more interested with how I felt. I woke up energized and had more energy throughout the day. I could think more clearly. My confidence shot up and I got a little more swagger in my step.

I am sticking with it.

We’re now 6 months out from the day I decided to change things. Here is where I stand: 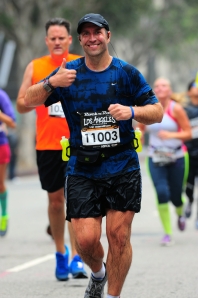 On December 15th I ran the Holiday Half Marathon in Pomona (my 23rd half marathon) and posted my fastet time ever. And size wise, I am skinnier now than I was as a freshman in college.

People have asked me what crazy diet I’m on. Simple, I’m not on a diet. I just eat healthier.

People say I must spend every waking moment in the gym. Nope, one hour a day during the week.

Sure I do long runs on Saturday, but that’s my choice for fun (yup, I consider it fun). I could be just as active playing tennis, or hiking or riding a bike along the beach.

I still sleep in on Sundays (well, until 8am on weeks when I don’t have a race). I still have burgers & fries. I still eat ice cream and drink beer. I just do it in moderation.

Change is hard, I won’t deny it… but change is worth it.

If there’s some part of your life that you’re unhappy with, dig down and find the strength to say “Enough.”

Find the strength to change.

Trust me… you’re stronger than you think.