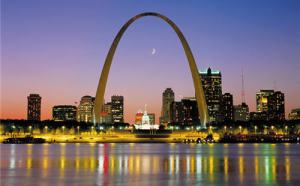 Not quite that high.

A few weeks ago I wrote the first installment of the “Freaky Foot Chronicles” where I talked about my mildly mutant “foot digits” (aka toes).

Well, time to wax nostalgic about yet another of my maladies (one that several other runners I know share). The downside is it sucks. The upside is it’s a manageable condition that won’t prevent me from being a running fool for the next 40-50 years.

I’ve got high arches… really high arches. Not quite the St. Louis Arch arches or “McDonald’s arches” arches, but certainly higher than is considered normal.

Or as my nieces would both say… “Uncle Scott, you’re weird.” No surprise there girls.

So back in early 2009, a few months after I began distance running, I started getting an odd pain in the arch of my left foot. When I woke up in the morning and got out of bed, it would really hurt to step on my foot. For about the first minute or so, I had to walk on the ball of my foot or just hobble around spouting rapid-fire obscenities. Then the pain would dissipate and all was right with the world… until the next morning when the same thing would start all over again.

It would also bug me a bit on my longer runs as the mileage progressed.

I was only few months away from my first marathon and hoped I hadn’t messed something up that would sidetrack me.

I went to the podiatrist for the first time who quickly diagnosed me with plantar fasciitis. Yes, the dreaded “PF.” For those of you who don’t know (or didn’t click the link), plantar fasciitis is caused by “straining the ligament that supports your arch.”

Fortunately, there are multiple treatments for the condition, but each person responds differently. So, I began my “guinea pig” phase where I tried just about every solution possible… including voodoo.

NEW SHOES: Runners love getting new shoes, so no big deal there.

CUT BACK ON RUNNING: I was training for the marathon… not gonna happen doc.

LOSE WEIGHT: Um, that’s one of the reasons I was running in the first place.

ICE YOUR FOOT: I spent every moment I could trying to turn my foot blue.

TOE & CALF STRETCHES: I spent hours stretching, rolling a golf ball under my foot and any other thing you could think of. I looked a little more foolish than normal.

“THE BOOT” and “THE SOCK”: I even tried both the Strassburg Sock and “Robocop-esque” boot (not at the same time mind you), wearing them in an attempt to keep the ligament from constricting while I slept. But since I couldn’t sleep with those things strapped on, they inevitably went sailing across the room around 1:00am.

Back to the podiatrist and he thought my pain might be a combination of plantar fasciitis and bursitis. His solution: cortisone injection in my foot.

Sure doc, freeze my foot and jam that sucker in there if it’ll help.

Just before he jabbed me with that medical harpoon the doc warned me it might hurt.

“Curse of the Mummy Foot”

I’m very proud that when he rammed that needle into the base of my foot I did a spot on Steve Carell “40 Year Old Virgin” chest-waxing impression: “KELLY CLARKSON!”

No dice; my tootsie still hurt.

The podiatrist decided we needed to get serious (as if ramming Excalibur into my foot wasn’t serious enough)… time for the custom inserts.

Not inserts in my foot mind you, although I was intrigued by the idea of becoming “bionic” and unleashing my inner Steve Austin… Na na na na na na.

Nope, custom orthotic inserts for my running shoes. And not your off the shelf Dr. Scholl’s inserts, but rather the “real deal.”

FYI, “real deal” translates into “expensive” as in $500 a pair. Yeah, running is a cheap sport my ass.

So, I went in and the doctors made a plaster mold “life cast” of my feet. They basically transformed me into the “CURSE OF THE MUMMY FOOT.” And it did turn into a bit of a horror show because they forgot to trim the hairs on the top of my foot before making the molds. And when it came time to remove the hardened plaster, I got an impromptu Brazilian foot wax, “KELLY CLARKSON!”

Two weeks later I was presented with a pair of personalized plastic tongue-looking things to put in my running shoes. They looked kind of stupid and I wondered if I’d just spent half a grand on glorified odor eaters. 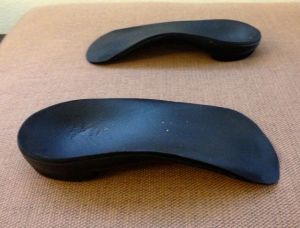 But damned if they didn’t do the trick. The arch pain quickly went away and hasn’t bugged me to this day.

I logged over 3500 miles on those bad boys before I retired them last year and replaced them with the 2013 model. Oh, and I have the leftover molds of my feet in my closet, should I feel like grossing out visitors or using the world’s most expensive paperweight.

So, if you have arch problems, I’ve shared your pain and sympathize. Check with your podiatrist and hopefully the solution doesn’t involve everything I went through. But if it does, drop me a line and we can terrorize the villagers together in “RETURN OF THE CURSE OF THE MUMMY FOOT.”