No act of kindness, no matter how small, is ever wasted.  -Aesop

For those of you who live in SoCal, the radio waves (if you still listen to regular radio) have been swamped the last few months with Honda’s latest marketing campaign, entitled “Random Acts of Helpfulness.”

In the ads, a Honda representative speaks to a random stranger and offers to help them by paying for something they need. Examples include: airline tickets to visit family, a new garage door, college application fees, a work wardrobe and even an automatic softball pitching machine. Like I said, random.

And while it’s still just a marketing campaign to help improve Honda’s brand image, the upside is a some people receive a helping hand they might not otherwise get. There are far worse ways for Honda to spend their advertising dollars, so I’ll give them some props for the effort.

Now, what does this have to do with running, you might ask?

Well, this weekend I was on the receiving end of a random act of “race” helpfulness… although not courtesy of any car company, but rather just a random person.

On Saturday morning I was on the outskirts of Las Vegas running the inaugural REVEL Mt. Charleston Half Marathon, which was a lot of fun  (a review will be up in a few days).

When I run, I wear an Amphipod hydration belt with a pouch for my stuff and clips for water bottles. The number of bottles I carry (1-4) depends on how far I’m running.

Do you want to run with Batman?

It’s my version of Batman’s utility belt… if he were a runner.

During half and full marathons, I typically carry two 8oz bottles. I really only need one, but the other is a safety, in case I lose one during the race (it’s happened on a few occasions). The problem is that the bottle snaps into a clip on the belt, but I can be a bit clumsy and not click it in properly. As a result, the bottle drops to the ground while I clomp on completely oblivious.

I bet Batman never misses when he’s clipping batarangs onto his belt.

Back to Mt. Charleston. I’m at the 8-mile mark of the half marathon and having a really good race (it turned out to my 3rd fastest half). I grabbed my bottle from my belt to take a quick swig of water and apparently Mr. Clumsy reared his clumsy head again. I didn’t clip it on properly and the bottle fell to the ground without me noticing. I kept running on my merry way. 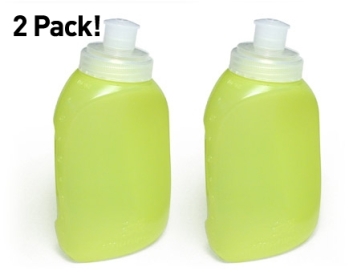 But someone else noticed.

A race spectator, who I’ll call “Mr. Awesome” started waving and yelling frantically to me. When I finally realized he was singling me out (and not the rest of the running mass), I looked at him. He yelled “You dropped your water” and pointed back at my accidentally-discarded bottle.

I glanced back and saw the orphan bottle about 20 yards back. I did the mental calculation on how long it would take to double back and grab it. I was really in a good running groove and didn’t want to “break my stride.” Besides, I had my safety bottle (that’s what it was there for). I decided to keep going.

I gave the guy a smile, a “thumbs up” and yelled “Thank you. Don’t worry about it.” He waved back and I went on with my race, utilizing my remaining bottle for my hydration needs.

Cut to the last half mile of the race.

I’m a bit sore, but really happy with how the race has played out. I decide to push it even harder, picking up my pace. With about 300 yards left, I’m running pretty hard and I get ready to turn onto the final straightaway. But out of the corner of my peripheral vision I catch someone frantically waving their arms. It’s Mr. Awesome.

As I turn my head and make eye contact with him, he extends his arm and guess what he’s holding. 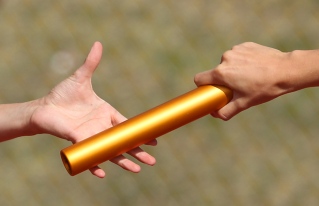 He moves to the edge of the course and extends the bottle, like a relay runner holding out a baton. As I run past him and without breaking my stride, I snatch the bottle from his outstretched hand. I yell out “You’re awesome dude” as loud as I can. I snap the bottle on my belt, head down the final straightway and across the finish line.

After catching my breath, grabbing some water and making my way out of the finishers’ area, I looked for the good samaritan who did the good deed. But I couldn’t find him amidst the sea of spectators. I was a little bummed.

I didn’t get to thank him properly, but that’s not why he did what he did. He was just being a cool guy doing “a solid” for a random stranger.

A race fan. And on that day, my favorite fan.

Pay it forward… and Run on!

Posted on May 9, 2016, in General and tagged Amphipod, Honda, REVEL Mt. Charleston. Bookmark the permalink. Comments Off on RANDOM ACT OF RACE HELPFULNESS….