“Moving sucks.” -Anyone who has ever moved.

I will pause for your sympathy.

You truly don’t know how much stuff you have until you put it in boxes and move it from point “A” to point “B.”

And no matter how well you plan, or how much you promise that you will be the sterling example of organization, moving eventually deteriorates into a “free-for-all” where you just start shoving crap anywhere.

I’ve moved several times since I first came to LA. And it has sucked.

Well this time had an added wrinkle as I was moving in with my girlfriend Lindy. She owns a cool one bedroom condo in Encino (that we decided we’d live in until we buy/rent something bigger in six months or so).

I was living in a 2-bedroom (with a den) apartment in Sherman Oaks.

You do the math.

So not only was I moving, but also downsizing/putting stuff in storage, at the same time.

Basically the moving equivalent of putting a watermelon inside a banana skin.

Note: For the record, Lindy had a lot of stuff already.

Firstly, Lindy and I had a discussion of what to do with duplicate furniture/electronics.

She shouted quickly that she wanted to use our bed and my big screen TV.

Apparently I was able to come along as well (provided the bed and TV got there first).

Note: My marathon medal collection was a serious negotiation.

I’ll spare you the gory details, but the week prior to the move I spent my time mostly bopping between home and Home Depot, buying boxes and supplies. And going through everything I owned, deciding if it would make the cut or be relished to storage space oblivion… or worse yet, the donation pile.

And every trip to Lindy’s house brought along with it an SUV full o’ stuff.

The day of the move itself was a blur as the movers first had to empty out my old apartment and drop off certain items (mostly my TV and bed) at Lindy’s. Then they had to load up  her storage bound items and find space on the truck before a jaunt to Burbank. 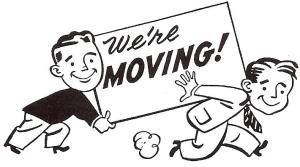 Lindy used to give me guff about my storage space (a 15′ x 10′ unit) being mostly empty. It’s now full to the rafters.

Oh, and I forgot one additional wrinkle…

Due to some genius planning on my part, I was scheduled to fly to Atlanta the day after my move (at 7:00am).

So no sooner did I bid the movers “adieu” and do my final walkthrough at my old casa, then I had to navigate a sea of boxes at my new casa… and shove whatever I could find into a suitcase and get a few hours of sleep before heading of to LAX.

But next time I move, I’ll be organized.

Pack, unpack, repeat… and Run on!