← JUGGLING, SORE NECKS AND GEEKING OUT…
SNAPSHOT: HOLLYWOOD HALF MARATHON ’15 →

Lace up your running shoes and join the H’wood crowd for a fun run up & back along the city’s legendary “Walk of Fame” for the 4th running of the Hollywood Half Marathon. This past Saturday over 6,000 runners gathered outside of the Chinese Theater for the pre-dawn start to the Half Marathon/10K and 5K races.

Registration costs for the Hollywood Half Marathon are quite reasonable when compared to other similar races as I only paid about $70. And while prices do climb as race day approaches, the Hollywood Half offers plenty of discounts on social media, various websites and through its many ambassadors. If you can’t find a discount code, it’s just because you didn’t look. Packet pick-up for the race was at another city landmark, the Hollywood Paladium Theater on Sunset Blvd. Their expo ran on Thursday and Friday and was quite easy to navigate.

The Paladium features a limited parking lot, but metered street parking is available if you don’t mind circling a block or two (just make sure you don’t park on Sunset during rush hour). One note, the race doesn’t offer race day packet pick-up (although you’ll still be able to get your medal if you show your race confirmation at the finish line). For future races I suggest they offer a raceday “solutions” table for those who can’t make it to the expo or have a travel snafu (a simple $10-$20 fee would probably make everyone happy).

Since the race starts at the Chinese Theater, there are several solutions to your transportation/parking needs. You can either park at the Hollywood Highland complex or one of the many nearby lots (expect to pay anywhere from $10- $25, depending on the lot). Just be sure to get down there before the streets close. Another very viable option is to use the Metro Rail since there is a station that lets off right at the Hollywood Highland complex. I parked at the Universal City Lot and purchased a Metro Rail day pass ($6, plus $1 extra if you don’t already have a TAP card) and it was a short 5 minute ride to the start line.

In its inaugural running in 2012, the Hollywood Half Marathon introduced the “Walk of Fame” inspired star-shaped medal, red in color, which I really enjoyed. In 2013 it was white and last year the medal was blue. 2015 is the last year of this theme (curious to see what’s on tap for next year) and this final medal in the series was yellow in color and a nice addition to the prior three.

A slight change up in the race T-shirts for 2015 as prior years were white with colored side panels. This year’s shirt was a standard black shirt and featured the H’wood Half Marathon race logo on the front. It’s a fine shirt, but just felt a little less inspired than previous shirts. Here’s hoping next year’s shirt starts up a new theme as well.

For Legacy Runners (yours truly included), this year featured a sweet Hollywood Half Marathon running hat which complimented the legacy shirt from last year. I enjoyed seeing dozens of fellow legacy runners clad in their shirts trekking up and down the boulevard. Next year’s legacy prize I believe is a duffle bag (I think we get a gulfstream jet around year 10, but don’t quote me).

Over it’s four year history, the race course for the Hollywood Half Marathon has undergone numerous facelifts (hey, LA knows its facelifts). Last year the race had to juggle things around at the last second and the course featured numerous turnoffs of the main street for a few blocks in order to add some distance to reach the 13.1 mile length. This year’s course continued its “wonky” ways (the race directors promise things to get better for next year’s race).

As mentioned before, the race starts in front of the Chinese theater and more or less does an “out and back” configuration utilizing Hollywood Blvd. as its main route. All of the runners (half marathon/10K/5K) start at the same place (and time). Signs tell the runners of the 5K/10K distances when to turn around.

For the half marathon runners there’s one little additional hiccup near the end, as we need to run past the finish line (which is off of Vine) for an extra half mile or so before doubling back. It does play a little bit with your head and that last mile just feels extra long as a result. Here’s hoping the 2016 course irons out all of the remaining bugs and loses the turnoffs. 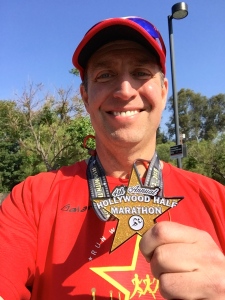 Course services for the Hollywood Half Marathon are pretty standard fare, with water and energy drinks being provided approximately every mile and a half to two miles. The volunteers were a little on the light side in numbers (but still appreciated), so at times you were left grabbing your own cup off of the table. It would be wise to bring your own water bottle, just in case.

The course featured markers for most miles (no digital clocks, so bring your GPS along), but I did notice that a few of the signs were looking a little beat up (and Mile 10 was just a banner draped over a barricade). It might be time to invest in some new mile markers. And while they’re at it, the shoe chip timers could be upgraded from the old hard plastic tags that need to be cut off after the race and replaced with the disposable shoe tags or bib tags.

The race featured a decent finish line area where runners received some good snacks and water along with a chance to take a finisher’s photo.

Being a founding/legacy runner, I have a real soft spot for this race. I consider it to be the “little race that could” and continue to support it even with its shortcomings (we all love underdog stories). As the race prepares to hit its fifth year in 2016, I’d like to see the Hollywood Half Marathon resolve any ongoing issues and take it to “the next level” (sorry for using the entertainment industry cliche). Hollywood is known for movie sequels that fail to live up to the original. I hope that Hollywood Half Marathon can channel its inner “Fast and Furious 7” and show that the latest installment can be the flashiest of the franchise.

Posted on April 13, 2015, in General and tagged Hollywood Half Marathon. Bookmark the permalink. Comments Off on REVIEW: HOLLYWOOD HALF MARATHON- 4/11/15.

← JUGGLING, SORE NECKS AND GEEKING OUT…
SNAPSHOT: HOLLYWOOD HALF MARATHON ’15 →