Mother nature seemed to take the spotlight at the 30th running of the Los Angeles Marathon. The 2014 race was one of the warmest on record and this year’s edition seemed hellbent on breaking that mark. A week before the race, the 26,000 participants learned the awful truth. We were going to apparently be running a marathon on the surface of the sun.

As a result, the focus of the race race became more about “the experience” than going for fast times. And big kudos to the race officials for taking steps to minimize the heat’s impact. For starters they sent out numerous e-mails telling runners about the impending heat and how to best prepare.

In addition, they increased the course support (improved water stops) and even moved the start of the race up 30 minutes in order for runners to get a few miles in before the heat hit. I have a feeling the marathon start time will permanently shift earlier. As it turns out, some lingering cloud cover helped shave a few degrees off of the temperatures, but it was still one of the hottest races I’ve ever run.

And now the rest of the info…

Registration costs for the LA Marathon are pretty standard for a big city race. And since the race sold out again this year (about a week before race day), it’s wise to purchase your spot early, lest you be relegated to being a spectator. Packet pick-up for the race was at the marathon expo located at the LA Convention Center.

The LA Marathon has one of the better expos out there and it’s worth stopping by to check out the vendor wares and freebies. One little tip, rather than shelling out $15 for expo parking or similar costs at one of the nearby lots, just drive 3-4 blocks away and you can find ample meter parking (more cash for race souvenirs). 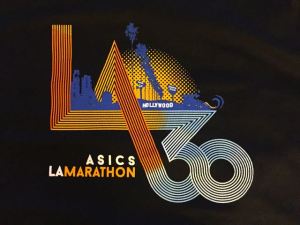 Since the LA course is a point-to-point race, parking/transportation is a little complicated. Racers have the option of being dropped off or parking at Dodger Stadium (traffic can get a little crazy as the start time approaches; get there early). The other option (and better option in my opinion) is to park in Santa Monica and take one of the race shuttles/buses to the start line at Dodger Stadium.

You can pay for a parking spot ahead of time (which is a good idea) and it will set you back $20, but the shuttle is free for all runners and it’s a pretty painless process. Although, be warned that the shuttles tend to run “early early” in the morning in order to guarantee you getting to the starting line with plenty of time to spare. I had a 4:30 am shuttle that got me to Dodger Stadium at 5:00am and ample time to relax (and then get anxious for the race to start).

For swag fans, the 2015 LA Marathon T-shirt featured a black shirt with light blue side panels and featured a retro “LA 30” design on the front. It’s a more subdued look than last year’s shirt and it worked for me. As for the medal, this year’s design displayed a big “30” logo in metallic blue with the cityscape and finisher ribbon beneath it. A nice piece of bling to add to the collection.

Back in 2010, the LA Marathon ditched its downtown course in favor of a point-to-point “Stadium to the Sea” path and it has transformed an average marathon into a destination race. It truly is a spectacular route that hits numerous LA Landmarks.

The fast ones. I never saw them.

Starting at Dodger Stadium, the course travels through Chinatown and parts of downtown before heading up into Hollywood and past the Chinese Theater. Then you head down Sunset Blvd and into West Hollywood before a jaunt along Rodeo Drive, Beverly Hills and a turn toward the ocean.

A quick run through the VA Hospital grounds (seemingly the toughest and least attractive part of the course) follows and then heads out onto San Vicente Blvd along residential streets before a final left at Ocean Blvd. The last mile of the course is run along the ocean and ends just a few blocks away from the Santa Monica Pier. It truly is a magnificent course that shows the heart of The City of Angels.

As mentioned before this year’s race was run in extreme heat and as a result the race’s already solid course support was improved even more. Water/Gatorade stops were at every mile (although they got a little less organized in the last few miles of the race). Cliff also was on the course, providing gels at various stops for runners. Medical personnel were even more present this year and I saw several of them tending to any downed runners along the course.

The biggest shout out though has to go to the fans. Knowing that this was going to be a challenging race because of the heat, the citizens of LA turned out in force. And they all seemed to be carrying goodies. From water (in cups and squirt guns), to ice, to fruit and salty snacks, the fans and charity groups showed the runners just how much they love the marathon. One runner I passed told me he’d never seen so much ice in his entire life.

I think I speak for all of the 26,000 participants when I say “Thank you LA for your love and support.”

The finish line for the LA Marathon was what you’d expect for a large race. After you received your medal, you were given a Mylar blanket (aluminum side out to reflect the heat as opposed to keeping it in) and access to various snacks and water. An incredible post race treat was the small hand towels soaked in cold water and available to each runner. 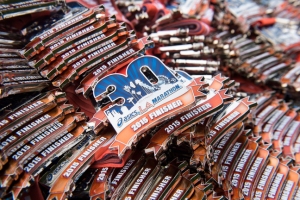 After surviving a 26.2 mile run in a virtual sauna, being handed an ice-cold towel is an absolute slice of heaven. One little picky note is that racers could really benefit from bags to hold their post-race snacks. I know for a fact that my dexterity was totally off and holding three different bags of snacks and a bottle of water was a virtual impossibility (I again used my hat as a makeshift sack).

I will say the final walk to exit the “secure area” was really long (or maybe I was just really tired). There were plenty of other amenities available such as “cooling buses” for overheated runners. And if you didn’t feel like hanging around the course once you have your medal in hand, the 3rd Street Promenade and beach were just a stone’s throw away (but please don’t throw stones, you might hit a runner or spectator).

Put simply, when I think of what a high-profile marathon should be, Los Angeles now comes to mind. With its wonderfully scenic “LA” course, fantastic fan support and other amenities, the LA Marathon deserves to be mentioned in the same breath as many of the other established A-list races. This is another race I’m more than a bit biased toward (it was my very first marathon), but it has been a near annual tradition for me since I first ran it back in 2009 and will remain on my “to run” list for every year to come.

NOTE: Next year’s LA Marathon will be run a month earlier (Feb. 14th, 2016) in order to coincide with the Olympic Marathon Trials.