← REVIEW: AVENGERS SUPER HEROES HALF MARATHON
“BOTTOMS UP”… AND A NICE GESTURE → 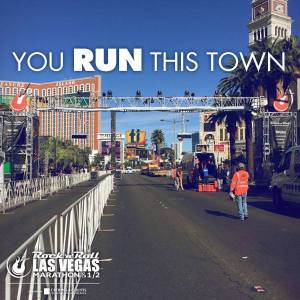 WEATHER AT START: 51° and sunny… colder when the sun went down.

“Viva Las Vegas” everyone!  It was a busy night in “Sin City” as almost 30,000 runners shut down the famed Las Vegas strip, gambling that they could finish the latest running of the Rock ‘n’ Roll Las Vegas Marathon/Half Marathon.

Registration fees for Rock ‘n’ Roll races are definitely on the high side and Las Vegas is one of their most expensive ones (guess it costs a lot to shut down the strip). Waiting until the last minute you can expect to spend over $150 for the half marathon. Fortunately, Rock ‘n’ Roll offers numerous discounts online (including $13 off of races each 13th of the month). 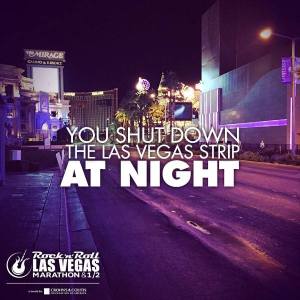 And there is another option as you can sign up for the North American “TourPass” (unlimited Rock ‘n’ Roll races in the US for $449 in 2015). I registered for the Las Vegas race courtesy of the “TourPass 3-Pack” for $199. My 3-Pack also included the Rock ‘n’ Roll San Diego Marathon (in July) and Rock ‘n’ Roll Los Angeles Half Marathon (in October). It’s a pretty good deal, basically giving you 3 races for the price of 2.

Unfortunately I can’t comment on the race expo as I didn’t arrive in Las Vegas until 2 hours before the race. From what I heard from other runners, the expo was fairly sizable and presented a good variety of vendors offering up their goods.

I chose to pay for same day bib/shirt pick-up, which was available for an additional $40. That’s a bit pricey for a basic service; clearly the high cost was designed to discourage everyone except for seriously “time crunched” runners. Since I had races on both Saturday and Sunday morning in CA, I had no option but to agree to pay the extra fee because runners had to pick up their own bibs (no sending friends/family in your stead). 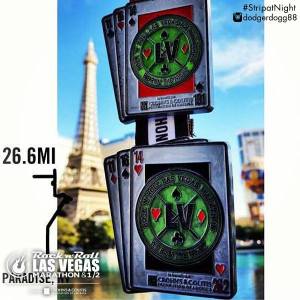 For the Love of glowing bling!

The Rock ‘n’ Roll series typically has decent bling and shirts (the 2014 Rock ‘n’ Roll Los Angeles Half Marathon tech shirt was a miss) and they kept that “more good than bad” trend going in Vegas. Given that there is a “lil bit” of gambling going on in Las Vegas, it makes sense that the bling would celebrate our love of giving our hard earned money to the casinos.

This year’s medal featured an overlapping trio of playing cards: the 11 of clubs, 16 of hearts and 14 of spades, showing the date of the race (I’m waiting for some blackjack dealer to pull out the 14 of spades). The medal also featured a red ribbon and the various playing card suits (the full marathon had a black ribbon). And bonus, the medal also glows in the dark! The Rock ‘n’ Roll Las Vegas race typically has black colored tech shirts and this year is no different. The shirt features the well-known “Welcome to Vegas” sign mashed-up with the race’s “We Run The Night” slogan.

For those traveling to Vegas you’re visiting the land of taxis, so getting around shouldn’t be a problem. If you drove to Vegas, odds are you parked at one of the casinos/hotels where you’re staying. Parking should be free (don’t worry, they’ll get that back from you at the tables). Another option is to use the Vegas monorail (get yourself a day pass and you’ll be fine). Or of course you could just hoof it along the strip (think of it as a warm-up).

Be warned that the start line (Mandalay Bay) and the finish line (Mirage) are a bit of a ways apart, so be prepared to trek either before or after the race. I stayed at the Luxor, so I had quite the walk in the cold after the race.

The Rock ‘n’ Roll Las Vegas Half Marathon features a basically flat “modified out & back” course as runners make their way down the main strip. FYI, this is one of only two nights a year that the strip is closed to traffic (the other is New Year’s Eve). Runners are gathered into 42 different corrals (a big field of racers) and start near the Mandalay Bay Hotel. Initially, runners head south to the outskirts of the city, hanging a U-turn shortly after the “Welcome to Las Vegas” sign (great photo op set up there). 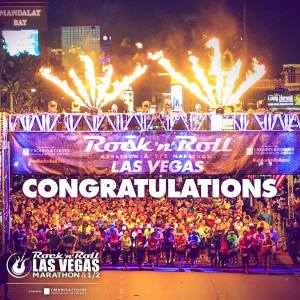 Bring on the “strippers.”

After that, runners basically head back up the strip past all of the popular casinos (MGM, Bellagio, Caesar’s Palace, Treasure Island… just to name a few) as they make their way toward the older part of the town. I have to say that running down the main strip of Vegas is a pretty sweet experience (talk about sensory overload). And the throngs of cheering fans/”gamblers taking a break” make it even better.

Around mile 7, runners leave the strip and weave through a bunch of nondescript Las Vegas side streets. This is definitely not the highlight of the race as the bright lights of the strip are temporarily gone and your only illumination comes from street lights and some temporary generators. The meandering backstreets eventually lead runners to Freemont Street, but unfortunately only the full marathon runners get to run down the famed boulevard. The half marathoners turn just shy of the street and instead make their way back to the strip. The final 3 miles retrace your route on the main Las Vegas strip, passing multiple casinos and hitting the finish line around the Mirage.

The Rock ‘n’ Roll Las Vegas Marathon had solid services before and during the race. They had a nice pre-race area, complete with live music to help runners get in the mood to pound the pavement (and an elevated VIP area for those who wanted to pay extra). Multiple water/Gatorade stops were situated along the route as well as plenty of medical tents/areas. And MartahonFoto was out in force snapping photos all along the way (and thank you for placing multiple photographers at the “Welcome to Vegas” sign).

Mile markers were present on the course, although the only digital clocks were at the start and finish line (bring your GPS watch). And runner tracking was available for friends/family so they could leave the warm casinos (and slot machines) in time to cheer you on at the finish line. 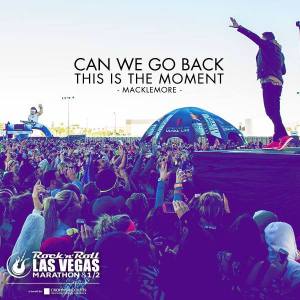 The finish line area for the race was basically a cordoned-off chute along the Vegas strip. On the upside, runners were given a plethora of things upon completing the race… water, chocolate milk, Gatorade, Powerbar wafers, chips, fruit and the much needed mylar blankets given the dropping temperatures (I took two). Some plastic bags to carry the snacks might have helped, especially with runners sporting chilled fingers at this point.

On the downside, given the huge number of runners, the chute felt increasingly cramped. Rather than dawdle, I grabbed my snacks and quickly made my way out of the finish area. There was a post party with live music, but to be honest I was simply too tired and cold to hang around and party. Instead, I made a beeline for my hotel and a much needed warm shower. 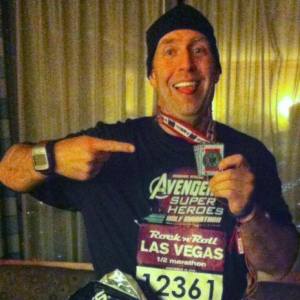 I’ve run the Rock ‘n’ Roll Las Vegas Half Marathon twice before, in 2010 when it was still a morning race and again in 2011, the first year it was run at night (and an unorganized disaster). It seems that Rock ‘n’ Roll has fixed many of the shortcoming of that original nighttime race. The current incarnation of the half marathon/marathon is rather enjoyable. This is definitely one of the larger (and pricier) races you’ll run with over 25,000 finishers in the half marathon alone. Nighttime races are not the norm and that novelty alone is enough reason to give the race a try. And if you’re a fan of Vegas, this gives you another reason to check it out.

Viva Las Vegas… and Run on!