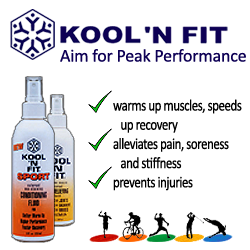 Time for another fun giveaway from Tripping The Kenyans. But this contest is a little different as you have not one, but five chances to win this week.

More on that in a quick bit. First off, let’s talk about what’s up for grabs.

Kool ‘n Fit Sport is an all-natural performance spray designed to be used before, during or after a workout (FYI, Kool ‘n Fit has multiple types of sprays/oils). It acts as a “vasodilator,” which is a fancy way of saying it increases blood flow (and no, it doesn’t attract vampires).

The spray can aid you warming up your muscles before you run, slow the onset of fatigue while running, help alleviate cramps (hell yeah) and also speed post-race recovery, reducing next-day soreness (’cause being sore kinda blows).

I’d seen Kool ‘n Fit at race expos in the past (such as the Holiday Half Marathon) and even tried a test spray or two. I remember liking the menthol/minty-like smell and figured I’d have to give it a try during a race. 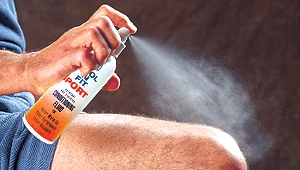 Apparently ask and ye’ shall receive.

Kool ‘n Fit had an aid station out on the course during the latter half of the OC Marathon. My calves were already barking when I approached their tent. As I ran up, I paused like a car making a pitstop and said “Hit me… hard.”

They quickly gave the back of my legs a good blast and off I went. In addition to the nice smell (think of it as race potpourri) I did feel an improvement in my lower legs over the next few miles. Damn if this stuff didn’t work.

I also remember cramping up badly during the San Diego Rock ‘n’ Roll Marathon and hoping to see a Kool ‘n Fit booth on the course for some relief. No such luck, as unfortunately they weren’t at that particular race.

Win one of me!

As a result I got a bottle of their sport spray and portable spray applicator that I now carry on my fuel belt during runs.

I also used the spray after the Shoreline Half Marathon two weeks ago (in conjunction with my PRO Compression socks) to help my sore muscles recover faster. Felt good. Thumbs up.

And now on with the contest…

The great people at Kool ‘n Fit have given me a “quintet” of 4oz bottles to giveaway for FREE (normally $14.99 each and enough to last you for a while). So, I’ll be giving away one a day, all of this week. The contest goes live at 7am (PST) each day.

But you’re going to have to do a little “mental lifting” to take home the prize.

Here’s what you do…

Have fun… and good luck.

So, without further ado, here’s the question for Monday, July 28th:

Hint: The answer is somewhere on the Kool ‘n Fit website (www.koolnfit.com)