ME AND MY MANTRA

My sister-in-law Bonnie was the first person who told me I should get a running mantra.

When I first heard her mention it, I was like “Who shot who in the what now”* (incidentally this is what I say when someone says something that completely baffles me).

She explained it simply as a word (or words) or a phrase that you say to yourself when a race is getting tough and you need to focus and push on.

She was encouraging me to talk to myself… hmmm.

Sure, why not? At the time people already thought I was crazy for wanting to run a marathon, so why not confirm their suspicions with a little “outer” inner-monologue. Now, you don’t necessarily have to say a running mantra out loud. Thinking it might be sufficient, but hey anything worth doing is worth overdoing. Right?

At total peace. Wait, did I leave the iron on?

At the time Bonnie was the lone veteran runner in the family, while I was still a wet-behind-the-ears (perhaps it was sweat) rookie. And she was faster than I was… still is (damnit). So, I trusted her judgment.

Of course I did hit the internet to do some research on the topic, just to be sure Bonnie wasn’t having some fun with me (that’s the kind of thing I’d do).

But sure enough, once I got past all of the pop-up ads I did find numerous articles about the validity of running mantras and how repeating a reaffirming message can indeed help.

I also checked out my go to source for inspiration… Hollywood. And indeed, many films (especially sports films) feature characters reciting mantras when the going gets tough.

The main points I took away about the running mantra were:

In other words, you need to come up with your own mantra. No one can choose it for you.

And like many aspects of running (and life in general), you don’t always get it right on the first try. 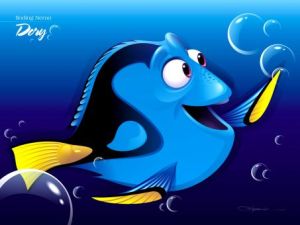 Dory is as wise as she is forgetful.

So, I thought long and hard in the months leading up to my first marathon, trying mantras on for size. The one I settled on (keyword: settled) was “Life is a highway; I want to run it all night long.”

Yup, it was a play on a song lyric and I thought I was damn clever.

I used it during my first two races, but like a shirt that looks and feels better when you try it on at the store as opposed to when you get it home… it just didn’t fit right.

Jump ahead to the Chicago Marathon in October 2009. Things were going well, until mile 20 when the wall came calling. I wasn’t sure if I could finish, let alone keep my speed up or maintain my run/walk ratio.

And in a moment of clarity, my mind hit me with a phrase… “My race; my pace.”

Do it for love of the game.

Short, sweet, positive and it rhymed.

I had my mantra.

I spoke it out loud amidst the running crowd of the Chi-Town Marathon and I finished strong.

And I’ve used it ever since.

So, for those of you who don’t have a running mantra, get one. It will indeed help you push on when you hit the weeds.

If you’d like some examples of potential running mantras, here’s some good ones collected for the blog “Runladylike.”

Or here’s a couple of Hollywood inspired mantras:

I am a leaf on the wind. Watch how I soar. – Hoban “Wash” Washburn (SERENITY)

Clear the mechanism. -Billy Chapel (FOR LOVE OF THE GAME)

You can try one of those on for size to see how they fit, but I strongly suggest you just use them as inspirational placeholders until you find your “Goldilocks” (the one that’s just right).

And if you see me at a race saying something to myself, know that it just might be me speaking my mantra during a tough spot.

Or I might have finally gone off the deep end.

Speak up and… Run on!

*NOTE: This is a quote from “The Simpsons,” specifically made by Jasper in the episode “Who Shot Mr. Burns, Pt. II.” Pop culture reference…..mmmmmm.

(What is your running mantra?)

Posted on May 21, 2014, in General, Motivation and tagged Dory, Finding Nemo, For Love of the Game, mantra, Runladylike, Running Mantras, The Simpsons. Bookmark the permalink. Comments Off on ME AND MY MANTRA.