…’cause every girl’s crazy about a sharp dressed man. -ZZ Top

The Purple People Eater for the OC Marathon.

Let me start by saying that I am no slave to fashion. In fact I often dress like fashion is a four letter word.

I’m fairly certain there have been days when the fashion police dispatched their S.W.A.T. team and one of the fashion snipers had me in the crosshairs asking H.Q. for the command to open fire.

The irony is my dad is one of the best dressed men I’ve ever known. In fact, he spent his entire career working in men’s clothing for several of the biggest high-end clothing retail department store chains. He’s always “Dressed to the nines” while my level of dress could be measured in fractions… very small fractions.

My excuse? I’m a “creative” who works in the entertainment industry. I spend long days writing and plenty of others in production or on set. It’s almost expected that I dress causal and comfy. Yeah, I’ll buy that.

And while I do clean up fine when necessary (yes, I do own a few suits), I’d be happy to spend every day from now until the inevitable zombie apocalypse wearing jeans (shorts in summer), a T-shirt and sneakers. Of course once the undead get freaky, I’ll be clad in total badass post-apocalyptic zombie fighting garb (katana optional).

Sorry, you caught me on a bit of “rambly” tangent today.

So, what the hell does this have to do with running? Glad you asked.

I’ve mentioned before about my growing affinity (and expanding collection) of race hats. It seems that has now spread to my race shirts.

And before you go asking, remember on race day I don’t wear the tech shirts given at the expos due to the “Forbidden shirt” rule. I am a superstitious lad, aren’t I?

I think it started when I bought a shirt specifically for the LA Rock ‘n’ Roll Half Marathon last October. I had dropped a significant amount of weight and all of my older race shirts were too baggy. So, I bought a Nike shirt just for that race. It felt good to buy something “tighter” for a change and from what my friends said, I actually looked presentable (goofy smile notwithstanding).

And the trend continued… a new Nike shirt (red) for the Holiday Half Marathon, another Nike one for the OC Marathon (purple) and I just opened the package for my shirt that I ordered specifically for the San Diego Rock ‘n’ Roll Marathon. It’s an orange and black gradient shirt (yeah, this one is Nike too).

Oh, and did I mention that Lindy bought me a Batman running shirt for my birthday (back in March) to wear at the Avenger’s Super-Hero Half Marathon* in November. Yes, I already have a shirt purchased specifically for a race in November.

*Note: Yes, I do know that the Avenger’s Super-Hero Half Marathon is a “Marvel” themed-race and there is nothing more “DC” than Batman. So, this will be a bit like drinking a Coca-Cola at a Pepsi company picnic… I’m aware of that. There is a method to my madness, which I will explain when that race day gets closer and all will be right with the world… unless the Sentinels get me first (there, I ended with an X-Men reference). Do they work for the fashion police too? 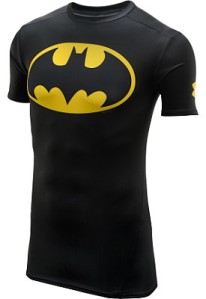 I do believe with my race shirt addiction I have opened a bit of a “Pandora’s box.” With over 14 races left on my schedule for the rest of the year, that can potentially get into a piggy bank shattering situation.

Luckily, I do have a few staples/traditions that will bring a little sanity to my newfound madness. The LA Marathon will always feature my Team To End AIDS shirt. And I make certain to wear my Half Fanatics shirt (and in three weeks will add my Marathon Maniacs shirt) to a select number of races. And the Hollywood Half Marathon will get my “Legacy” shirt from this point on. But that still leaves me a multitude of races to show off some potential running flair.

I’m sure the guys at the Nike Store and Dick’s Sporting Goods are salivating at the chance to get me inside their doors.

Fortunately, I am not averse to hitting the outlet malls and I do have enough lead time to wait for sales and clearances (can you hear my credit card breathing a sigh of relief).

But if you see me at the San Diego Rock ‘n’ Roll Marathon or one of my other races this year, please be sure to say “hi.” I’ll be the guy sporting a happy grin and most likely a fashionable new race shirt.

Which is good news, because from what I hear, those fashion police snipers have itchy trigger fingers.

Dress well… and Run on!