← WARNING SIGNS OF A HAPPILY OBSESSED RUNNER…
MY FAVOR… → 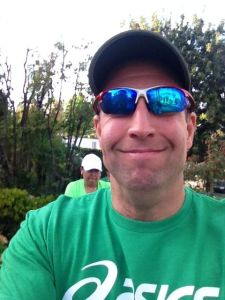 On any other day of the year, “green” references have to do with being ecologically friendly and helping the planet.

But on March 17th, everything GREEN is about “St. Patrick’s Day.”

From shamrock shakes (yum) to corned beef and cabbage, to four leaf clovers and wearing green (lest we be pinched), one day each year we let our inner-leprechauns run free… and we’re definitely not in search of a marshmallowy breakfast cereal.

In the tradition of getting a little “Luck of the Irish” (which could be considered a euphemism for drinking) I did a pub crawl last night with a twist.

Last night I did my first “pub run.” It will not be my last.

Never before have I combined my love of running with my love of good beer. It’s like a liquidy “adult” Reese’s Peanut Butter Cup combo just waiting to happen. Although one doesn’t usually think that those two would go well together (like the first time you hear about “chocolate covered bacon”…also yum), I thought I’d give the notion of repeated 12oz carbo-loads a go.

I met up at A Runner’s Circle in Los Feliz with the ARC club for a 3-mile St. Patrick’s Day run with 5 “pit stops” (aka bars/taverns/pubs/watering holes/sanctuaries) in between.

We were a small, well-behaved bunch of about 100 runners.

Now normally, I’d run 3 miles in about 24-27 minutes, but for some strange reason last night’s jaunt took somewhere in the neighborhood of 4 hours.

Hmmm. I wonder where the time went.

Oh yeah, I remember now. We were drinking, running and having a great time.

Cheers… and Run on!

Learning about the real meaning of St. Patrick’s Day.

He wanted a beer… badly.

Obeying the law… for now.

Hanging with my new friend Manny.

I have a “halo,” MaryEllen does not… hmm.

There’s more where that came from.