← CARTOON ME!
MY RUNNING FAMILY →

RUN AND BE GRATEFUL

In the short time I’ve been writing this blog, I’ve had a lot of fun telling my personal stories, giving out hints, race reviews and poking fun at something I love so dearly. I prefer taking a light-hearted and humorous approach to this and life in general.

But there are some things that irk me, make me mad or in this case utterly friggin’ pissed off.

I read a news story today and it made me want to yell to the heavens at the top of my lungs.

Yesterday morning Meg Menzies was out for her daily training run when she was hit and killed by a drunk driver. CLICK HERE for the news story.

For the record, I had never heard of Meg before I read this heartbreaking article. She lived in Richmond, Virginia and it’s doubtful our paths ever would have crossed other than maybe running the same race at some point (but that will never happen now).

I wish I had met her. She sounds like she was a great lady.

This was a devoted wife and mother of three, loved by everyone who knew her. She was an avid runner and a Boston Marathon qualifier (so she was obviously a bit of a speed demon). She was training for Boston when her life was violently taken by a drunk driver. And this driver was a licensed doctor. “Do no harm,” my ass.

And now I feel a little guilty, because reading her story, I’m selfishly thinking of me. I’m thinking of the close calls I’ve had when running. In my five years of pounding the pavement, I’ve had 5 near misses with cars (scary average). And each time the driver was at fault.

The first one involved a driver who ignored a stop sign and I had to jump back to avoid being hit.

The second was a driver who took a curve too fast and swerved into the shoulder lane, necessitating me to jump to the left to dodge them.

The third time involved a driver who drifted into the shoulder lane. She was texting on her phone. She noticed me at the last second and swerved to miss me.

The fourth time involved a driver doing a rolling stop (and that’s being generous). He looked left, but not right (the direction I was coming from). He certainly learned I was there, because I slammed my hand on his roof as he drove past. He wasn’t happy, but then again neither was I.

And the fifth, well this one infuriated me the most, because it involved a deliberate act.

I was running with my T2 group, single file on the shoulder of a road when we saw a car approaching. This driver either didn’t like runners or he was mad at something else and decided to take it out on us. Even though there was an empty lane next to him, he didn’t do the proper thing and give us some space. Instead, he angled his car to get even closer to us. His driver’s side mirror missed us all by less than a foot.

I responded to his planned act of “kindness” by showing him a single finger (and yes, it was the middle one). This driver actually turned around and got out of his car to yell at us that we had no business being on the road. I’m not sure what his actual goal was, but if it was to prove that he was an utter D-Bag, then mission accomplished.

All of these instances both angered me and scared the living daylights out of me. A foot or two more, or another second of inattentiveness on the driver’s part and I could have been seriously injured or even killed. I was really really lucky. 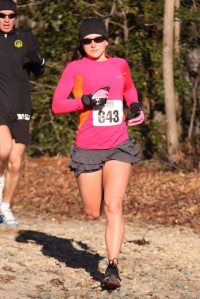 Doing what she loved.

Meg Menzies was not so lucky. She doesn’t have a story to tell about the jerk that almost hit her. Yesterday she went out for a run and never came home.

So, here is my plea to the drivers out there.

And now some words to impart to my fellow runners.

This Saturday, January 18th, the friends of Meg Menzies are asking runners everywhere to dedicate their runs to her. This passage is from the “Meg’s Miles” Facebook Page.

“…no matter what your distance, no matter where you live, run for Meg. Take in the fresh air, be aware of your surroundings, keep your headphones on low, feel the heaviness in your lungs, the soreness in your legs, and be grateful for it–for all of it. The sweat, the pain, the wind, the cold… everything. Be grateful for that moment.”

On Saturday morning I’m running 17 miles with my T2 training group. It’s going to be a long and hard run, but I look forward to it… even more so now.

I will run. And I will be grateful.