← NAME THAT TUNE
THE “NIGHT BEFORE” GEAR PREP → 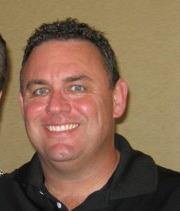 A few days ago I wrote about why I run, but I purposely left out one important detail, so I could write about it today. January 3rd marks the one-year anniversary of the passing of the man who was my running coach, my mentor and my friend.

As I mentioned before, back in the fall of 2008 I was a lost soul looking for something to call his own. I signed up with the AIDS Marathon training program looking to re-invent myself and do something I considered impossible. When I showed up at Griffith Park for that very first training run, however, I wondered if I had the personal strength and dedication to see it through.

Then I met Scott… Coach Scott.

He smiled, shook my hand and simply said to me “You’re going to run a marathon.” He showed confidence in a person he just met like he and I had been good friends for years. And I believed him.

During the eight months of the training program, Scott took one hundred out-of-shape newbies (and alumni) and turned every one of us into runners. Each week he’d greet the whole group with a bellowing “Good morning AIDS Marathon!” He’d give us running tips, talk about our training and then lay out the course for our run (hills and all). He’d see us off for each run and would often drive to water stops to see how we were doing and then be back at the finish line to tell us how much we rocked. And we believed him. We had rocked. 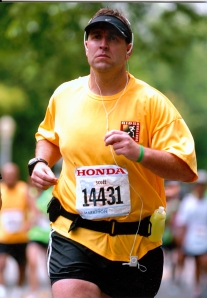 I can’t tell you how many times I’d stay after the run and bombard him with questions and concerns. He listened like my problems were his and gave me the answers I needed. And when solutions weren’t easy, he gave me a pat on the back and said I’d be fine. He lifted me up when I was down, took away all of my doubts and told me to believe in myself.

The week before the marathon, Scott gave each runner a simple green rubber wristband that had one word on it… Believe.

(Over the next few years, Scott gave me a few different wristbands. I still have them all.)

On Marathon day as I stood terrified about the 26.2 miles that lay ahead, Scott came up and hugged me like a father seeing his son off on the first day of kindergarten. After the race, as I sat in great pain nursing my quickly tightening muscles, Scott walked up to me. I looked up at him and started babbling about how my race plan had gone off the rails. He smiled and said, “It doesn’t matter. You did it. You’re a marathoner.”

After the season I continued running races on my own, but Scott told me I was family and always welcome to run with the group. And I took him up on his generosity, doing many of my long runs as a bandit with AIDS Marathon (who became T2- Team To End AIDS). During the 2010 LA Marathon, Scott served as course support from miles 20-22. He ran those two miles over and over, carrying a backpack full of supplies, making sure each and every one of the T2 runners was fine. When I reached mile 20, I was far from fine. I was hyponatremic, nauseated and on the verge of dropping out. Scott ran/walked with me for a full mile, feeding me salt and getting me past the wall. He gave me the confidence that I could keep going. Without Scott, I would not have finished that race.

Jump ahead to the fall of 2011 and I received a call from Coach Scott. He asked if I was going to run with T2 that year. I said I wasn’t certain, as there was a good chance I’d be relocating to Atlanta in the New Year. He stated this might be his last year coaching T2 (he didn’t say why at the time) and wanted his former students to come out. I said absolutely.

Turns out I wasn’t alone. For the 2012 training season, the attendance at T2 more than doubled any year in the past. In 2012, T2 was the 2nd largest charity group for the entire Los Angeles Marathon, numbering over 200 strong.

It was at one of the group runs that I learned why Scott wasn’t certain if he’d continue coaching. He explained that he’d been diagnosed with not one, but two different types of cancer simultaneously. He stated that he’d be coaching us, but also undergoing chemotherapy, so he might miss a few sessions here and there. 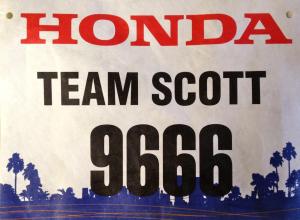 My Bib for the 2012 LA Marathon…because we could only have 11 characters and “Dragonslayer” didn’t fit.

Almost every week Scott was there. And when he lost his hair and was forced to wear a mask, if he could stand, he was there. And when he physically couldn’t make it, his wonderful wife Dolly would often show in his place to say how he was doing. And Scott’s parents… they’ve been part of our run support since my very first day of running…. and are still there to this day (bearing peanut butter crackers and pickles).

Scott beat not one, but two types of cancer. We dubbed him the “Dragonslayer.”

And to celebrate, Scott was determined to run the 2012 NY Marathon (a race he had to defer the year before because of his cancer). He flew off to New York ready to do his victory run. But as we know, Superstorm Sandy ravaged the area and the marathon was cancelled. So what did Scott do… he spent his time there volunteering and helping out those in need. That was who he was.

Shortly after the 2012 LA Marathon I briefly relocated to Atlanta to teach college. I stayed in touch with Coach Scott telling him about my races and what was up with me. In December, I found out that I was going to be permanently coming back to LA, right after the New Year. I wrote him and asked if I could join up with T2 for the 2013 LA Marathon training program. He enthusiastically said yes and that he couldn’t wait to see me. Sadly, I never did get to see him.

During my cross-country drive back to LA I learned that Scott had suddenly passed away. The news hit me like a brick and that night in my hotel room I cried for the loss of my coach and my friend. 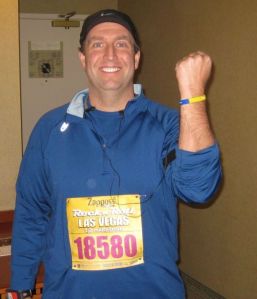 Showing off one of Scott’s wristbands at the 2011 Las Vegas Half Marathon.

We have a new coach at T2, JC Fernandez. He’s also a student of Coach Scott, and he has done a fabulous job carrying on Scott’s legacy… of course, he had a great teacher. And Scott’s parents are still giving support on the course with their peanut butter crackers and pickles (and the new chocolate pecan pretzels). And Dolly has come by to greet our group as well. It warms my heart to see them all.

On this, the first anniversary of Scott’s passing, I think about what he did for me. He took a self-doubting person at one of his lowest points and helped him achieve something he thought impossible.

He is the single greatest teacher I have ever had.

To this day I still wear one of Scott’s wristbands at every race I run… and I always will. On Saturday night I’ll put on the green one again and run knowing that he’s looking over my shoulder.

Because of Scott Boliver, I am a marathoner and a runner.

Because of Scott… I believe.