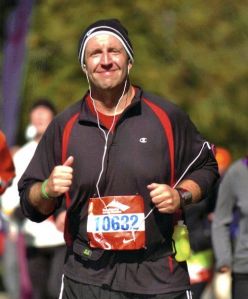 Have music, will travel.

When it comes to running, the topic of music can lead to some heated discussions. Some runners refuse to listen to music, while others can’t take a step without first cranking their iPods to 11 and dialing up their own personal soundtrack (cue the theme to ROCKY). Music is a running subject that I plan to visit again in the coming months.

As for me, I have done runs without music and my iPod shuffle has also died on more than one occasion during a race. But when I hit the road solo or run a race, I prefer to listen to music. And I make a new music mix for each race (that’s my running OCD showing itself a little).

But today I want to talk about just one song… the first song. The song I listen to when the horn goes off and the race begins. The one that plays as I cross the start line and begin that journey of 13.1 or 26.2 miles. For me, that first song sets the mood for the whole race and I take its selection very seriously. It has to be the right song for the right race (again, sorry for the OCD).

To qualify as my “go to” song, I only have one hard rule… and that is it has to have the right cadence; the proper beat that compliments my running pace. Plenty of great songs fall by the wayside simply because they don’t have the right beat. Other than that, things are totally wide open. It can be a hard-pounding song with big guitars or a funny tune. It can be a recent hit or a classic from the ‘80s. It just has to make me want to run.

And how do I choose the actual song? I listen to tracks in my huge music library or on the radio/Pandora and it eventually hits me. If I wanted to be totally Zen I could say I don’t choose the song; the song chooses me… but I won’t.

That said, sometimes the decision happens quickly, while other times I can lamenting over it the night before a race, waiting for just the right song to present itself. So, here’s a quick list of a few songs that I’ve used to start races (there’s plenty more… be prepared for Volume 2 at some point)… and please feel free to use them should you need a little starting line inspiration.

“Life is A Highway” (Rascal Flatts)- One of those fun inspirational songs that just seems to fit. Tom Cochrane’s original version is great too, but I felt Rascal Flatts’ cover worked just a little bit better for me.

“My Hero” (Foo Fighters)- Great song from the VARSITY BLUES soundtrack. Also because a girlfriend and I were running our first race together and this was one of her two favorite groups. I’m such the romantic.

“Stacy’s Mom” (Fountains of Wayne)- Blame this one on the recent car commercial that sampled the song.

“Nobody’s Fool” (Kenny Loggins)- I remember this song played ad nauseum when CADDYSHACK II came out (awful movie, by the way). It played on the radio the night before a race; I thought it was perfect and rushed to download it from iTunes.

“Big Machine” (Goo Goo Dolls)- The first time I heard this I knew it was a great running song. And I’m a big fan of the Goo Goo Dolls, so that helps too.

“The Phoenix” (Fall Out Boy)- No musical group is better represented on my running mixes than Fall Out Boy. One of these days I plan to run a race listening to nothing but their music.

“Some Nights” (Fun)- “Some nights I stay up cashing in my bad luck”… that opening line sung a capella still gives me chills.

“Money Talks” (AC/DC)- It was a tough choice between this and “Who Made Who” but either way you can’t go wrong with a little hard rock.

“Love Don’t Live Here Anymore” (Lady Antebellum)- Years ago I dated a girl who loved Lady Antebellum and I thought this was the right song (beat and lyric wise) to play at my first race after an ugly break-up.

“The Touch” (Stan Bush)- Whether you’re a fan of Optimus Prime (yes, the song was featured on the TRANSFORMERS: THE MOVIE sound track) or Dirk Diggler (a little BOOGIE NIGHTS anybody?) this cheesy ‘80s song made me smile and got me going.

“Jump” (Van Halen)- I played this song at my last race of 2013. The keyboard combined with David Lee Roth’s energy was infectious. It seemed to work because I did PR that race.

(Tell me what are your favorite songs to run to… I’m always looking for new ones).

Posted on January 2, 2014, in General. Bookmark the permalink. 2 Comments.