← WHEN THE WEATHER OUTSIDE IS FRIGHTFUL…
HACKETY HACK… →

But before this weekend, I had never run a race in the cold cold cold rain. Unlike a Reese’s Peanut Butter Cup, rain and cold are not two great tastes that go great together.

On Sunday, I ran the Atlanta Hot Chocolate 15K (that’s 9.32 miles to you and me) in a downpour while the weather at the start was rather nippy. Needless to say, it was an experience I’ll remember. Or as I like to refer to it… a slog.

All week I had been monitoring the forecast for the race, checking my weather app almost hourly. Rain had been predicted for days, but I hoped that maybe the conditions would shift and we’d be spared from getting dumped on. 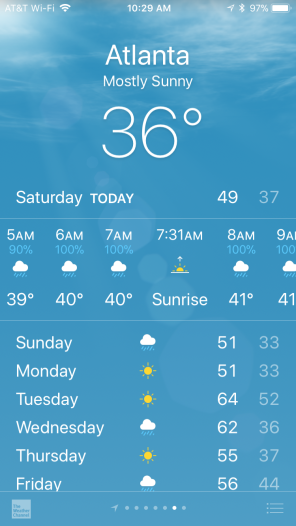 On Saturday morning I checked my app for the umpteenth time and it had the chance of rain during the race listed at 100%. Not much wiggle room there. And then later in the day, it shifted from rain to “hard rain” and then a freezing rain advisory came out.

Yup, I was getting wet. Really wet. And toss in near-freezing conditions and this event was shaping up to be a 9.32-mile suckfest.

Come race morning (actually I guess technically it was still night) and I awoke to the sound of rain bitch-slapping my roof like my roof had made off-handed and suggestive comments about the rain’s mother. And then I checked my weather app to see that it was a near-freezing 34 degrees out (shall we say snow adjacent).

I got ready and loaded the back of my SUV with about a half-dozen outfit options and headed off for Mercedes-Benz Stadium, cursing my “far too busy” windshield wipers the whole way. I even had to turn them up to full speed because I was having trouble seeing the road. Not a good sign.

I arrived about an hour before race start, parking in one of the lots nearest the start line (pre-paid parking was a good option) and sat in my SUV watching the downpour play its second verse (same as the first). I was determined to stay in my car until the last possible minute; no need to brave the elements prematurely just to wait and suffer at the start line. 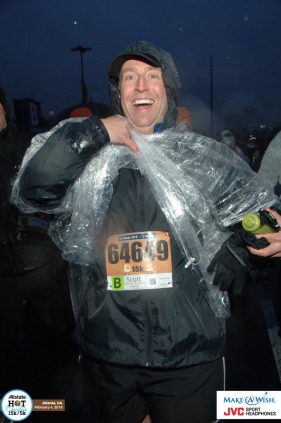 Flashing the photographer with my too sexy disposable poncho.

From my front seat, with the heat blasting I might add, I watched a succession of runners emerge from their cars (in various degrees of inclement weather gear). From the expression on their faces, none of them was happy. When the clock showed about 20 minutes to the gun, I opened my door to get a heaping helping of the weather I would be running in. I hoped I had made the right choice with my garb.

I was clad in calf sleeves and shorts and not too worried about my legs being cold (thanks to years of playing soccer growing up in NJ and Wisconsin). I also figured if I wore long pants they’d just get wet and I’d earn an early ticket to chafe town. My real concern was keeping my torso and hands warm and hopefully dry. I had a cold weather top and planned to cover it with a disposable poncho and add a pair of medium weight running gloves.

Well, the disposable poncho didn’t want to cooperate and I knew my glove choice was too timid. So I broke out the running rain jacket and a pair of neoprene/cold weather gloves (with some hand warmer packs). I had a running cap on my cabeza to deflect the water and a pair of running glasses in my pocket just in case (I hate water spraying in my eyes).

And off I went to the starting line. 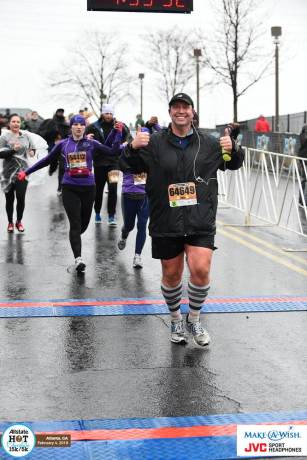 My thumbs were frozen in that position.

Standing in the starting corral was an exercise in “misery loves company” as we all shivered with the rain pounding on us. I labored setting my running watch and iPod shuffle because my frozen fingers were having trouble hitting the button (and good luck setting them with gloves on). The National Anthem played over the plastic trash bag covered speakers and not a single person removed their hats. It didn’t mean we weren’t patriotic, just freezing.

The gun mercifully went off  (the race directors knew better than to delay the start) and the slog was underway. My raceplan was simple… finish and get the hell back to my car. This was not a day for PRs or to really even worry about your pace. This was a day to avoid hypothermia and make sure you didn’t slip on the slick roads. I set my watch for a very conservative run/walk ratio and really didn’t look at it much (my watch vibrates for intervals).

I had also hoped to keep my feet dry as long as possible by avoiding puddles. That strategy worked for almost an entire quarter mile. Yeah, I ended up playing “count the puddles I totally hit”… I gave up when my internal counter hit 50.

By mile two my cold weather gloves became saturated (and my hand warmers lost their oomph). So I spent the next seven miles knowing that my fingers secretly hated me and personally blamed me for making them so damn cold.

I really didn’t have a great sense of the runners around me (and their misery) because I had my hood pulled up over my hat, which kind gave me blinders. Which is probably for the best because I didn’t hear a lot of chatter on the course. I think everyone was pretty much focusing on dodging puddles and putting one soggy foot in front of the other.

Note to self: Not real chocolate.

Miles 3-7 were kind of a drippy blur for me. The rain was coming down at a steady pace and I just zoned out and focused on the next mile marker… and the next.

I guess at mile 7 the running gods had tired of dumping on us (maybe they had to prep for their Super Bowl party) and the rain suddenly lessened to a misting. I pulled back my hood and happily regained my peripheral vision. But at this point I was utterly soaked and my saturated feet were threatening to start blistering.

So I enjoyed my little rain reprieve and kept slogging on and on. Finally, I saw the mile 9 marker (meaning only .3 miles and change to go). I was waterlogged and starting to shiver and happy the end was near. After cresting one final crappy hill (yet another overpass), I enjoyed a downward slope and the final turn into the parking lot. 15K run and done.

I got my medal (a pretty cool one that looked like a chocolate bar minus a bite) and then my cup o’ hot chocolate with yummy accessories. I drank that mother as I hightailed it to my car and changed into warm clothes. The Hot Chocolate team put on a good race. They certainly weren’t to blame for the shitty weather and they were well organized with some good bling and swag. I’ll probably run it again come next year.

As I drove home I thought back about the slog. These are the kind of races that make you truly appreciate when you get to run an event in ideal conditions. As my coach reminded me years ago, you don’t just run when the weather is peachy. And every experience like this makes a more informed racer. Wise words.

I’m sure there will be other slogs in my future. And I will learn from them too. But in case the running gods are listening, I’m feeling pretty informed at this particular moment. How about sending me a race with some nice weather so I can learn more about that. That’d be sweet.

Bundle up… and Slog on!