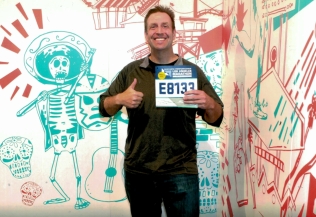 As I sit here with my tired legs still recovering from last Sunday’s Los Angeles Marathon, my mind keeps drifting back to the race. I had grand plans, including the hopes of a marathon PR. Unfortunately, it was not one of my better running days. All my best laid plans (of mice and men) went very much awry.

But rather than focus on why the wheels came off during my marathon, I’d rather highlight how a friend helped me and how I was able to pass that help along.

I had started feeling fatigued way too early in the marathon, around mile 7 (not a good sign) and by mile 12 I knew my day was in the midst of going completely south. All strategy and game plans I had made went right out the window. I was in survival mode (relegated to power walking) with only one goal in mind: finish.

In the midst of 25,000 other runners and a multitude of fans, I briefly felt utterly alone. I was in the weeds. I began what I felt was going to be a sucky solo trudge to the ocean.

Imagine my surprise when shortly before mile 14 a familiar voice rang out saying “Thought I’d come run with you for a few miles.” The voice belonged to my buddy Stephen Germain, a fellow Team To End AIDS (T2) runner. Except he wasn’t running LA this year… even though he could have.

Stephen is a longtime T2 member; he and I ran side by side for a good chunk of the 2015 race. This year he had run the training program again with T2 and raised funds, so he was qualified to run (had a bib number and everything). But business trips had kept him on the road for most of Feb. & March, so instead of running he chose to come out and cheer on his friends. Oh, and I should also mention that Stephen has been one of the top donators to my T2 fundraising the last two years. He’s the kind of friend you feel very lucky to have.

Back to the race.

I originally figured I’d see Stephen at the T2 cheer area (at mile 15), but instead he came running onto the course when I came by near mile 14 to offer moral support. What he didn’t realize is he was giving me some serious race life support. Stephen knew I was not in a good place, so he let me vent about how bad the race (and everything else) was going. And boy did I vent. It was a bitch session of epic proportions. And after I spouted about life, the universe and everything, Stephen offered a few choice words of encouragement… and walked along with me.

Now I had figured that Stephen just would hang with me a mile or so until we reached mile 15 and the T2 water stop. That would have been the sign of a good friend.

When you’re stuck in the weeds, it’s great to have friends by your side.

Stephen stayed by my side through miles 14, 15, 16 & 17… all the way through West Hollywood and Beverly Hills. Yup, four miles and two towns worth of companionship. He let me stew when I needed to and also offered support where necessary. He was like a psychiatrist in running shoes.

I don’t know if I would have finished the race if Stephen hadn’t gotten me through those shitty middle miles.

When Stephen finally said his goodbye and merged back into the crowd, my lingering thought was how could I possibly repay that act of friendship and kindness. Well, I guess the running gods heard me. Cut to mile 19.

At that point I was focusing on just putting left foot in front of right. I was certainly in a better frame of mind, thanks to Stephen, but now I was seeing that if I didn’t pick up my pace I wouldn’t break the 6-hour mark for the marathon. Now mind you, my marathon PR is 4:58 and I was originally hoping to best that on Sunday. So I was running a full hour behind my goal pace and I sure didn’t want to miss coming in under 6 hours. 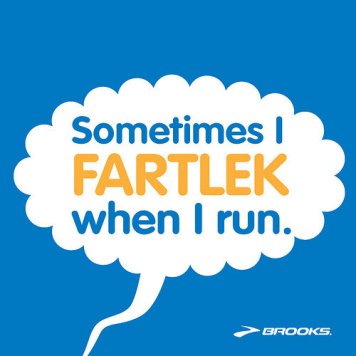 Do you fartlek in public?

But up ahead I saw another one of my T2 running buddies. And he was just standing on the course looking pretty dejected. I approached and asked how he was feeling. Well, he made my marathon’s trials and tribulations seem like nothing. He’d already thrown up twice, was really hurting and strongly considering throwing in the towel. And then he simply asked if I’d help him make it to the finish line.

I told my friend that I’d walk with him the rest of the way and we’d finish together. So for the next three or so miles we walked at a slower comfortable pace, making sure he drank enough and didn’t cramp up. We talked and bitched, doing whatever we could to take our minds off of aching and tired muscles.

As we approached the mile 23 marker, my friend turned to me and said “Are we going to break 6 hours?” I told him I’d probably miss it by a few minutes, but he could still make it if we stayed at our current pace (he’d started the marathon 5 minutes after me, so our times weren’t quite the same).

My friend said  he didn’t want me to fall short, that he was starting to feel better and suggested we start doing fartleks… basically picking random points to run to in between walk breaks. So from mile 23-25 we took turns choosing starting and stopping points. We’d turned the suckfest into a game and actually found a way to enjoy ourselves.

After we hit mile 25, my friend told me he was feeling much better and that he wanted me to speed up solo (to guarantee that I broke 6 hours). I gave him a fist bump and then took off. Oddly enough I felt more energized than I had since the start of the race.

So I ran the last mile at a decent clip and crossed the finish line with a time of 5:55:15. Yup, it was my slowest marathon ever, but I still had a smile on my face. I waited at the finish line for my friend to cross just a few minutes later. We hi-fived and then got our finisher’s medals at the same time.

Not a fast race by any stretch, but a still damn good one.

Pay it forward… and Run on!