Is that a pledge pin on your uniform?

Whenever I hear the term “legacy” I immediately think back to the classic comedy ANIMAL HOUSE where Kent “Flounder” Dorfman tells the gang at Delta house that he’s a legacy and that they’re usually asked to pledge automatically. That is unless of course the pledge in question was a closet-case.

And now I’m reciting quotes from the film rapid fire in my head.

When running races, however, being a “legacy” has a much different meaning. It’s not something you’re given, but rather something you earn by running a race every year (without fail) from its inaugural year up to the present.

Races that have been run for decades, like the LA Marathon or Peachtree Road Race, have their own legacy clubs. The Peachtree’s group is called the “Original 110” (guess how many members) and the LA Marathon has around 177 legacy runners who have pounded the pavement for all 31 marathons dating back to 1986.

Each year when I run the LA Marathon, I always see a few legacy runners (they have special bibs) and I’m sure to shout out some respect. They’ve earned it.

While I certainly don’t have any three-decade-long legacy records to brag about, I am a member of a few race legacy clubs and my longest standing one, The Hollywood Half Marathon, runs its fifth annual race this Saturday.

Oh, and for those of you wondering, there is a traditional 5-year anniversary gift: it’s wood. Yup, got a few decades to go before you graduate to silver or gold.

So what exactly is the benefit of being a legacy runner, other than some bragging rights of course?

Some races have extra swag to thank legacy runners for their dedication and continued support. And I must say The Hollywood Half does have some pretty nice perks. Two years ago I earned a special legacy tech shirt and last year I got a legacy hat. This year it’s a 5-year legacy medal (and no, it’s not made of wood). The swag keeps getting better each year because the number of legacy runners keeps getting smaller. I believe if you make it to year 15 they give you your own Gulfstream V jet (don’t quote me on that).

But more than the freebies (and yes we all love freebies), what I really like about being a legacy runner is seeing how a race grows, changes and improves over time. Inaugural races can be challenging because like a space launch there is inevitably some kind of glitch to overcome. Some glitches are small, some are big and sometimes Houston we definitely have a problem.

NOTE: I’ll be running an inaugural race in May (the REVEL Mt. Charleston) and I plan to do a post in the next few weeks on the topic of running “brand spanking new races.”

Now I think back to the first running of The Hollywood Half Marathon in 2012 and the hiccups and changes since that initial race. For starters, the start was different. The race began not on Hollywood Blvd. in front of the Chinese Theater like it does now, but rather by the entrance to Universal Studios.

This impacted the course greatly, because while the race started with a major decline as we made our way down Cahuenga Blvd. to Hollywood Blvd., it also meant that we had to run up that monster hill on the way back (at around mile 11 when we were starting to run out of gas). And yes, for the record, that did suck. 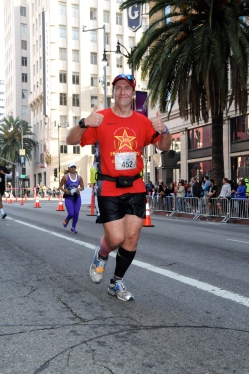 As a result, some runners resorted to grabbing the big gallon jugs of water, taking a chug and handing it to the next runner to do the same. Not the most hygienic thing in the world. I was lucky in that I always carry a small water bottle when I race, so it didn’t impact me personally as much.

I know at the end of that first race, a few runners swore they wouldn’t return for another round. I guess for them it failed the “double secret probation” (you knew I’d come back to ANIMAL HOUSE at some point).

I, however, was impressed by the hard work of race director Ken Nwadike Jr. just getting a race going in Hollywood. I also felt that this was a race that would grow and get better with time, which it has. And most importantly I had fun (the biggest determining factor of all).

So I came back for year two. And three. And four.

And this Saturday, I’ll be putting on my legacy hat and proudly running down Hollywood Blvd. at dawn for a fun fifth affair.

And I think I’ll end this post by quoting the legendary John Blutarksy when he gave the ultimate motivational speech to the boys at Delta House: “Nothing is over until we decide it is! Was it over when the Germans bombed Pearl Harbor? Hell no!”

And the legacy continues.

Louie Louie… and Run on!

Posted on April 4, 2016, in General and tagged Animal House, Hollywood Half Marathon, Legacy runners. Bookmark the permalink. Comments Off on LIVING THE LEGACY….