“REUNITED AND IT FEELS SO GOOD.”

On March 15th of this year, the many members of Team To End AIDS, gathered before dawn at Dodger Stadium to brave the “Stadium to the Sea” course for the annual running of the LA Marathon. It was a wonderful time as our squad triumphantly traipsed through the streets of LA, Hollywood, WeHo, Westwood and finally Santa Monica in near record heat (yup, it was a hot one).

However, once we crossed the finish line, gathered our race bling and gave each other some sweaty congratulatory hugs, many of us went our separate ways.

Sure, some of us met up for the Hollywood Half Marathon in April and T2 also had a small team at the inaugural Sunset Strip Half Marathon. But we weren’t meeting up each week at Griffith Park anymore for group runs and support.

Our LA Marathon training season was over.

(Note: T2 is currently training runners for the Camp Pendleton Mud Run and soon for the Athens Marathon and Honolulu Marathon) 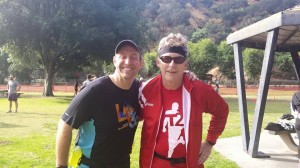 Me and my “Team Roadkill” buddy Brad.

Happily, this past Saturday, T2 had our “reunion run,” a chance for our team to get together, reminisce about the 2015 LA Marathon and look ahead to next year’s race.

It was a fun time as over two dozen of our crew showed up at 7am at Griffith Park at our usual spot to pound a little pavement. Many were clad in our T2 colors, while some of us (myself included) opted to wear our 2015 LA Marathon tech shirts (the race is done, no bad juju for wearing it now).

Before the race, Kerry (the head of T2) stood before us to talk about all of the wonderful things T2 & APLA have done for the community over the years and how your donations have been put to good use. Look no further than APLA’s Gleicher/Chen Health Center in Baldwin Hills, which opened recently and offers medical and dental services, as well as mental health counseling. Check it out!

The house that T2 helped build.

We also discussed next year’s LA Marathon, which will be staged a month earlier (February, 14th… aka Valentine’s Day) because LA is also home to the 2016 US Olympic Marathon Trials. It stands to be a great weekend. As a result, our training will start up a month earlier as well (September 12th).

Following Kerry’s announcements, Coach JC stepped up and addressed us. I have missed hearing his weekly group greeting of “Good Morning T2” (basically shouted at the top of his lungs). And after a few stretches, we were off. No big 20-mile trek this day. Instead runners had the choice of a 3 or 5-mile out & back jaunt (just a quick run). I opted for 5 miles and enjoyed chatting with my running group (when I’m solo it’s just me and my iPod).

After about 3 miles though, most of the group hung back while my friend Stephen and I picked up the pace a bit and trotted on ahead. We gabbed about comic books and movies and of course what races were up next.

All too quickly it seemed, we were back at the park and the run was over. Another round of sweaty hugs and everyone went on with their Saturday.

So, now it’s back to running solo for me for the next few months as I rejigger my running schedule and look ahead to my summer and fall races.

But come September, I’ll be back at Griffith Park each Saturday morning to meet up with the members of my running family as we once again raise money (get ready for my e-mails) to help those whose lives are impacted by HIV/AIDS… and to run a whole heap of miles too.

Posted on May 19, 2015, in General and tagged LA Marathon, Team To End AIDS. Bookmark the permalink. Comments Off on “REUNITED AND IT FEELS SO GOOD.”.