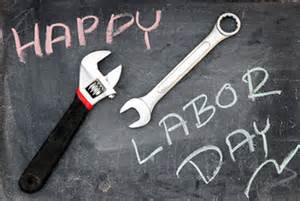 Not much labor to be done this weekend.

Welcome everyone to Labor Day Weekend, the “symbolic” last weekend of summer (even though the calendar says we’ve got another 3 weeks o’ summer fun left).

I remember as a kid saying it seemed kind of funny that we celebrated this “Day of Labor” by relaxing, grilling out and generally goofing off. It was typically one of the least laborious weekends of the year.

Works for me… and yes, I’ll have another burger.

For those of you wondering, Labor Day first became a national holiday in 1894 and is a celebration “dedicated to the social and economic achievements of workers” (or at least so sayeth Wikipedia).

But really, Labor Day often feels more like a celebration of a bunch of traditions or a time of transition.

According to the fashion police, this is your last chance to wear white or seersuckers before packing them away until next year (I believe they start handing out tickets next week).

For parts of the country it signifies the start of the school year. Although my nieces in Georgia might strongly disagree, as they’ve been back in class since Aug. 4th.

Labor Day also means the start of the football season (much to my girlfriend’s dismay). College ball kicks off this weekend as my Badgers look to upset LSU and my ‘Noles start the defense of their 2013 national title.

And my Green Bay Packers (I am an NFL owner after all… yup, one whole share of the team) kick the season off on Thursday in Seattle.

I’ve even done both of my fantasy football drafts and I’m ready for another year of anticipation (and hopefully no dashed hopes).

As for me, I’ve got two other traditions I’m looking forward to this weekend.

First off, tonight Lindy and I will be heading to the Hollywood Bowl to listen to legendary film composer John Williams conduct his music from a bunch of classic films: Star Wars, Raiders of the Lost Ark, E.T., Superman, Jurassic Park, Jaws and so many more. He typically performs on Labor Day Weekend and it’s become something that I look forward to each year.

Oh, and Labor Day Weekend typically signifies the start of the fall running season for me. Two of the last three years I’ve run the Conquer The Bridge Race (over the Vincent Thomas Bridge in San Pedro).

This year, however, I’m celebrating my fifth anniversary of distance running.

Back in Sep. 2009 I ran the Disneyland Half Marathon and I’ll be lacing my shoes up again for another trek through the happiest place on earth.

Lindy and I will be heading down to Anaheim on Saturday for a little Disney Expo time and some goofing off (hopefully with Goofy) around Downtown Disney. And after a little carbo loading (and hopefully victories by Wisconsin and Florida State) I’ll be heading to sleep early as the half marathon starts pre-dawn on Sunday.

Updates and “The Disneyland Half Marathon Experience” to follow all weekend.

Whatever you choose to do this weekend, here’s wishing you a very happy and safe Labor Day.

Enjoy… and Run on!