Come on down to Orange County for the annual running of the OC Marathon. Celebrating its tenth anniversary and sponsored by US Bank, the race celebration featured several events, including: a full marathon, half marathon, 5k and kids fun run. On a beautiful first weekend of May (a little warmer and sunnier than originally forecast) an announced record 22,000 overall participants lined up to have fun and pound pavement in and around the heart of the OC. At the forefront were the marathon (2211 finishers) which started before dawn and the half marathon (10,345 finishers) which commenced shortly afterward. Having run the half marathon in 2013, I was looking forward to seeing what the full marathon course had to offer.

Registration costs for the OC Marathon/Half are in keeping with the rates for most races. I ended up registering fairly early and paid around $99 for the full marathon (the half marathon was slightly less). As always, be sure to register as early as possible as the rates go up the closer you get to race day. The OC Marathon is typically well-represented at other race expos, so you can possibly find a deal there. And be sure to check sites like RaceGrader that have drawings for free registrations. As for the race expo, the OC Marathon/Half wisely utilizes the OC fairgrounds for packet pick-up on the Friday and Saturday before race day. Parking is $7 for the expo, but those willing to walk a little can find parking in the areas surrounding the fairgrounds. Getting your bib and T-shirt is a pretty simple and quick process and the expo has plenty of volunteers available to shuffle the crowds through. The expo itself is fairly sizable, offering up a good assortment of vendors showing off their goods. I took my time visiting the various booths and spent about 45-minutes checking out what was available.

The OC Marathon/Half is a point-to-point race, so runners have that dilemma of deciding where to park come race day. The best option for racers is to park at the finish line at the OC fairgrounds and then board one the many shuttles for a trip to the starting line. Racers are given a shuttle time when they receive their final race instructions… mine would have been a 3:55am shuttle for the full marathon (which started at 5:30am). Parking at the fair isn’t an issue as they have plenty of space (it is a fairground after all) and day of race parking was $10 (or $7 if you purchase it ahead of time at the expo). And for those people not wanting to touch their cars at all on race day, several of the partnered hotels offered shuttle service to the start line and after the race (be sure to check with whatever hotel you choose). I was fortunate in that the hotel I chose was located right by the starting line and afforded me some extra sleep time (a nice perk when your race starts pre-dawn).

This OC Marathon/Half sports a nice two color tech shirt complete with a small OC Marathon logo on the front and a larger one on the back. The 2014 edition shirt featured a dark blue color (and orange stripes) for the guys and a bluish-green (and light orange stripes) v-neck for the ladies. There were separate shirts for the full and half marathon distances with the only difference being the text below the logo reading “Marathon” or “Half Marathon.” As for bling, the 10th anniversary medal for the race featured a very vibrant blue and orange OC race logo with their slogan “Run it, Experience it, Love it.” The ribbon also featured different shades of blue and the race slogan… all in all, a very nice medal. The half marathon medal was very similar to the marathon medal, just slightly smaller and listing “half marathon” instead of the “full marathon.” Personally, I like it when the medals for the various distances are unique enough that they can be differentiated when seen from a distance. And there was also additional bling available in the form of two challenge medals. The first is the “Beach Cities Challenge Medal” (which is a huge) and is given to runners who complete the Surf City, OC and Long Beach races (half or full) consecutively. Note: the Beach Cities Challenge Medal can also be collected at Long Beach and Surf City. The new addition this year (which I managed to earn) was the “Double Dog Challenge Medal” and is given if you run the Surf City and OC races in the same year (one of the two must be a full marathon). It’s a double duty medal, looking like a reversible dog tag (featuring the Surf City and OC logos) and also serves as a bottle opener… which is well timed for use on Cinco de Mayo. One final surprise piece of swag came at the finish line this year as each race participant was handed a “10th Anniversary” disposable post race jacket… a very nice gesture. 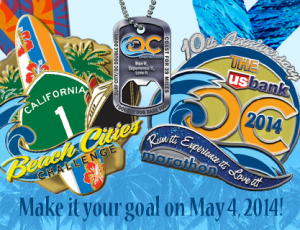 And here is where things change (not necessarily for the better). The difference between the first half and second half of the OC Marathon course is so noticeable you have to wonder at times if you’re running a different race. The scenic views of the ocean are gone as you run further into the heart of the OC. The course for the second half of the race travels down city streets, side streets, through various neighborhoods, around Segerstrom High School, the South Coast Plaza parking lot and along a bike path (with some bikers still present). Given that the number of runners has diminished by over 80% (only about 17% of the racers ran the full marathon), the course also noticeably narrows. The course itself remains mostly flat with the exception of an overpass crowning over the 405 freeway around mile 14 and another incline at mile 23. It eventually winds back to the OC fairgrounds and ends at the same spot as the half marathon. The only real inconvenience I felt in the second half of the race was crossing several streets near the end (including one main intersection) where traffic was still present. Granted there were police officers standing by and stopping traffic to make sure they didn’t interfere with runners at all, but it gave me an uneasy feeling (at least twice) that an officer might signal myself and other runners to stop so cars could go by (I’ve seen it happen at other races). If you’re looking for a pretty running course, enjoy the scenery of the first half and then just know that the second half is designed more for function (getting you up to 26.2 miles) than style. And given the facial expressions from most of the runners I saw in the second half, we weren’t really looking at the scenery anyway.

Again, this was a story of two races. During the first 12 miles of the race, course services were in strong supply. Water stations (and energy drink stations) were frequent and well-manned with volunteers. Around mile 9 they also offered energy gels and bars (and again around mile 19). MarathonFoto was out in full force for the first half of the race (plenty of good photo ops for those of us who weren’t snapping selfies). After mile 12, however, the services seemed to be like the runners (and fans)… in much shorter supply. The water stations, while present, weren’t as well-manned or organized and MarathonFoto seemed to be absent for a good 10 miles (no one around to snap shots of runners hitting “the wall”… which is probably a good thing). The services, along with the fan support improved as we hit mile 24 and started nearing the fairgrounds. Note: there was a nice cheering section right at mile 21 touting an alien theme… unfortunately, I was a little out of it at this point and didn’t quite make the connection (but the support was appreciated). I never felt that the services were really lacking or missing on the second half of the course, but given the high marks for the first half, the decline in the latter half of the race is worth noting. As for mile markers, signs were present at each mile (one or two were absent in the second half of the race) sporting quotes that racers supplied via a Facebook contest about what gives them their “edge.” It brought a smile to my face when I saw my quote up on the Mile 4 sign “Desire, determination, dedication… and caffeine.” In regards to timing, each runner had a disposable toe tag that kept their race stats and runner tracking was available for friends and family. On the course itself, the only clocks present were at the start and finish line (none present at the mile markers) so be sure to wear a watch or GPS.

The OC Marathon/Half knows how to throw a post race shindig. After finishing the race and being handed your race bling and food stuff (and yes, they had bags available for us tired runners to carry our snacks) runners were treated to a proper party…dubbed the “Finish Line Festival” and sponsored by Nutrilite. Since the race finishes at the OC fairgrounds, the infrastructure is already in place and affords a well-designed and relaxed atmosphere for runners, their friends and family. Areas were set up for the various running groups to gather post race and mingle or just take a much needed seat. Plenty of food and drink was available from the stands and food trucks. Runners could meander over to one pavilion to check their results or pick-up their auxiliary bling (Double Dog Dare and Beach Cities Challenge Medals) or hobble to the other pavilion for a free post-race massage. One of the local massage centers had dozens of tables manned and ready to receive the walking wounded (I took advantage of the complimentary rubdown as a very nice lady turned me into a human pretzel and saved me from walking like Robocop for the rest of the day). And for those people with the remaining energy to “raise the roof” the main stage was hopping with retro tunes courtesy of the “Flashback Heart Attack” and featuring singers/band members from some of your favorite 80s groups. Since the majority of people ran the half-marathon distance, the party was well underway when I finally arrived following my 26.2 mile jaunt. But as I approached the area I could hear “Jesse’s Girl” being played and played loudly, so not too shabby.

The OC Marathon/Half fits in well with its sister races (Surf City and Long Beach) as part of the Beach Cities’ Challenge. Each of the three races has a nice laid back feel to it (must be the proximity o’ the sea) and offers runners a chance to PR on a mostly flat and scenic course. And like the other two Beach City races, the OC Half Marathon shines when compared to the full marathon. So if you’re caught between doing the half and full marathon distance, know that the race starts pretty, but ends nitty gritty. This was the second time I’ve run the OC race and it will remain as one of my annual races (I do enjoy it). And even though the race is less polished in the latter half, I plan to run the full OC Marathon again come 2015.

Posted on May 6, 2014, in General, Race Review and tagged Newport Beach, Nutrilite, OC Half Marathon, OC Mararthon, US Bank. Bookmark the permalink. 2 Comments.