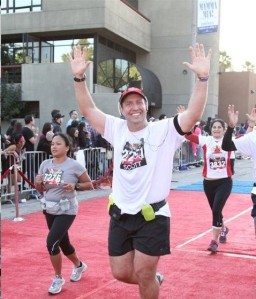 Putting my hands in the air, apparently like I just don’t care.

The other day I talked about the importance to me of starting a race with a great song. Well, I just finished my mix for tonight’s race and my “go to” song for the New Year’s half marathon will be “White Dress” by Parachute. The lyrics don’t mean much, but it has a great beat and it actually popped up in a dream of mine… yeah, sometimes it’s better not to ask.

But as I kill time waiting to get ready for tonight, I wanted to toss in an addendum and chat briefly about one song that appears on every one of my mixes. It is also the song that appears in my “last three mile” mix that I use when I’m hurting or need an extra push.

Now most people would think that the choice would be easy. Pick my favorite song of all time and crank it loud. Nope.

Rather, the tune to which I refer is my most “useful” song… an anthem that serves its purpose masterfully and has given me the strength to continue and pick up my pace on more than one occasion.

What is it this incredible song? I’ll tell you.

I’ll give you a moment to let that sink in. And no, I’m not hallucinating.

Not what you expected, right?

Here’s why this is the most “useful” song to me.

First off, it’s got a great beat, a perfect running cadence for me. The song moves and it’s impossible not to get you powering along.

It’s also not too long, clocking in at a brief 3:02. It does what it needs to and then ends quickly (not overstaying its welcome like some songs that seem to take forever to finally fade out and mercifully end). Like a melodic Red Bull, the song gives me musical wings (or should I say legs).

And most importantly, “The Witch Doctor Song” reminds me never to take myself too seriously (which can happen during tough stretches in a race). I’m not catching the Kenyans today, nor will I break any speed records. It reaffirms that I’m running for fun and I’m running for me. It breaks through the mental and physical anguish going on in my brain and provides me with clarity and perspective. Whenever I hear that silly song, it always brings a smile to my face… always. 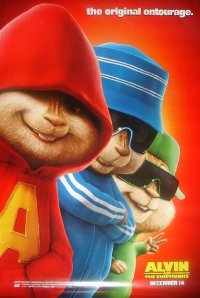 “I told the witch doctor…”

And hell, it’s got singing chipmunks, which is always a plus.

So, that is why tonight and at every race, at some point I will be bouncing along to the ballad belted out by David Seville’s rodent vocalists.

(Tell me about that one song that sticks out like a sore thumb in your running mix).